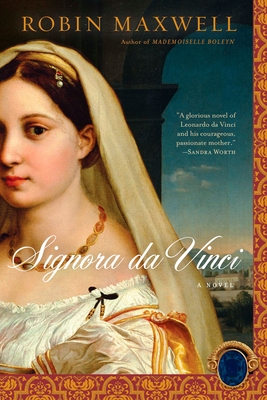 An enchanting novel on the life and origins of Leonardo da Vinci’s mother, as imagined by the author of the “absolutely superb” (Diane Haeger, author of The Secret Bride) Mademoiselle Boleyn.

A young woman named Caterina was only fifteen years old in 1452 when she bore an illegitimate child in the tiny village of Vinci. His name was Leonardo, and he was destined to change the world forever.

Caterina suffered much cruelty as an unmarried mother and had no recourse when her boy was taken away from her. But no one knew the secrets of her own childhood, nor could ever have guessed the dangerous and heretical scheme she would devise to protect and watch over her remarkable son. This captivating novel imagines the story of Caterina—the brilliant young woman, the adventurer, the alchemist—during the fascinating period of the Renaissance.

Robin Maxwell is the national bestselling author of eight novels of historical fiction. She lives in the high desert of California with her husband, yogi Max Thomas.

“A glorious novel of Leonardo da Vinci and his courageous, passionate mother.”—Sandra Worth, author of The King’s Daughter

“In her most remarkable novel yet, Robin Maxwell takes us back to the turbulent times of the Italian Renaissance... A masterful blend of fact and fiction.”—Michelle Moran, author of The Heretic Queen

“Signora da Vinci is a tour de force celebration of one woman's unquenchable ardor for knowledge and of a secret world that historical fiction readers rarely see.”—C. W. Gortner, author of The Last Queen