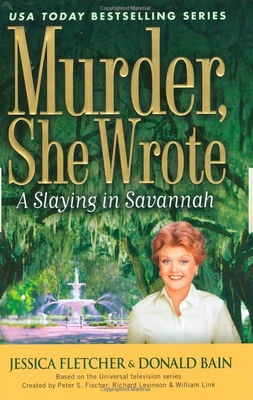 a Slaying in Savannah (Murder She Wrote #30)

Jessica is surprised to learn that her old friend, Tillie Mortelaine, has bequeathed Jessica one million dollars—as long as she solves a decades-old mystery. She must find out who murdered Tillie’s fiancé, Wanamaker Jones, who’d been shot to death during a New Year’s Eve party in Tillie’s home.

As instructed by Tillie’s lawyer, Jessica arrives in Savannah and settles into Tillie’s mansion. There she discovers that the spirit of Wanamaker Jones is still very much alive—and that there are those in Savannah looking to cash in on both Tillie’s demise and Jessica’s failure. Now, Jessica must uncover the ghosts of history—and deal with a few pesky spirits in the present—if she is to put the past to rest and solve a murder. Hopefully she won't wind end up getting put to rest herself...

Jessica Fletcher is a bestselling mystery writer who has a knack for stumbling upon real-life mysteries in her various travels. Donald Bain, her longtime collaborator, is the writer of more than one hundred and twenty books, many of them bestsellers.
or
Buy Here
Copyright © 2020 American Booksellers Association