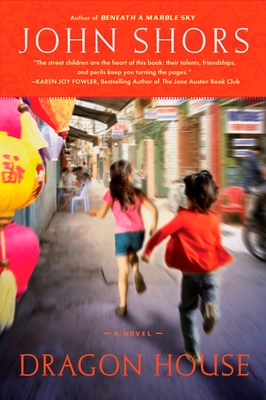 From the critically acclaimed author of Beneath a Marble Sky and Beside a Burning Sea—the new novel from “a master storyteller,”* set in contemporary Asia.

From John Shors comes an unforgettable story of redemption set in modern-day Vietnam.

Dragon House tells the tale of Iris and Noah—two Americans who, as a way of healing their own painful pasts, open a center to house and educate Vietnamese street children. In the slums of a city that has known little but war for generations, Iris and Noah befriend children who dream of nothing more than of going to school, having a home, and being loved. Learning from the poorest of the poor, the most silent of the unheard, Iris and Noah find themselves reborn. Resounding with powerful themes of suffering, sacrifice, friendship, and love, Dragon House brings together East and West, war and peace, and celebrates the resilience of the human spirit.

John Shors traveled extensively throughout Asia after graduating from Colorado College in 1991, living for several years in Japan, where he taught English, and then trekking across the continent, visiting ten countries and climbing the Himalayas. More recently, Mr. Shors worked as a newspaper reporter in his hometown, Des Moines, Iowa, before entering public relations and moving to Boulder, Colorado. Beneath a Marble Sky is his first novel.