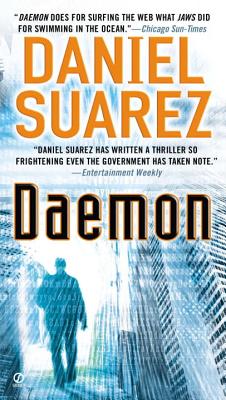 “Daemon is a terrifying thriller about rogue technology by an author who really knows his tech. You'll never watch someone playing an Internet game again without wondering what real-world consequences their online actions might be having.”
— Caleb Wilson, Pages For All Ages Bookstore, Savoy, IL
View the List

Daemons: computer programs that silently run in the background, waiting for a specific event or time to execute. They power almost every service. They make our networked world possible. But they also make it vulnerable...

When the obituary of legendary computer game architect Matthew Sobol appears online, a previously dormant daemon activates, initiating a chain of events that begins to unravel our interconnected world. This daemon reads news headlines, recruits human followers, and orders assassinations. With Sobol’s secrets buried with him, and as new layers of his daemon are unleashed, it’s up to Detective Peter Sebeck to stop a self-replicating virtual killer before it achieves its ultimate purpose—one that goes far beyond anything Sebeck could have imagined...

“Daemon does for surfing the web what Jaws did for swimming in the ocean...both entertaining and credible...an impressive debut novel.”—Chicago Sun-Times

“This thrill-a-nanosecond novel is certainly faithful to the techno-traditions of Michael Crichton and should delight not only readers of the 'science gone awry' genre, but general adventure readers as well.”—Booklist

“Daemon is the real deal—a scary look at what can go wrong as we depend increasingly on computer networks.”—Craig Newmark, Founder Craigslist