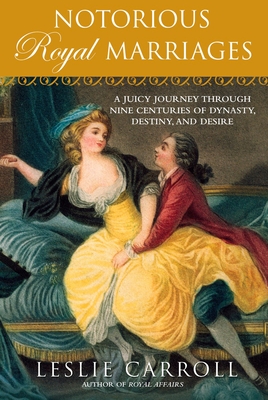 A Juicy Journey Through Nine Centuries of Dynasty, Destiny,and Desire

From the author of American Princess: The Love Story of Meghan Markle and Prince Harry comes a funny and delightful history of the royal weddings and marriages of Europe’s most famous—and infamous—monarchs.

“An irresistible combination of People magazine and the History Channel.”—Chicago Tribune

Since time immemorial, royal marriages have had little to do with love—and almost everything to do with diplomacy and dynasty. Clashing personalities have joined in unholy matrimony to form such infamous couples as Russia’s Peter II and Catherine the Great, and France's Henri II and Catherine de Medici—all with the purpose of begetting a male heir. But with tensions high and silverware flying, kings like England’s Henry II have fled to the beds of their nubile mistresses, while queens such as Eleanor of Aquitaine have plotted their revenge...

Full of the juicy gossip and bad behavior that characterized Royal Affairs, this book chronicles the love-hate marriages of the crowned heads of Europe—from the Angevins to Charles and Di—and ponders how dynasties ever survived at all.

“For those who tackled Hilary Mantel’s Wolf Hall, and can’t get enough of the scandal surrounding Henry VIII’s wives, [Notorious Royal Marriages] is the perfect companion book.”—The New Yorker

“Carroll writes with verve and wit about the passionate—and occasionally perilous—events that occur when royals wed....Carroll’s fascinating account of nine centuries of royal marriages is an irresistible combination of People magazine and the History Channel.”—Chicago Tribune (5 stars)

“Carroll is a sharp and amusing writer...You’ll be entertained like a tabloid would entertain you, but you’ll also learn as much as you would in a European studies course in college...a perfect marriage of a book!”—Examiner.com