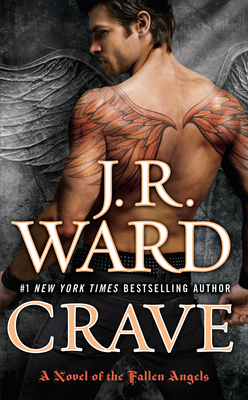 From the #1 New York Times bestselling author of the Black Dagger Brotherhood series comes the second Novel of the Fallen Angels, and a deadly new mission for the reluctant savior enlisted to protect the future of humanity…

Seven deadly sins. Seven souls that must be saved. One more no-holds battle between a fallen angel with a hardened heart and demon with everything to lose.

Isaac Rothe is a black ops solider with a dark past and a grim future. The target of an assassin, he finds himself behind bars, his fate in the hands of his gorgeous public defender, Grier Childe. His hot attraction to her is a totally wrong place/wrong time kind of thing—and that’s before Jim Heron tells him his soul is in danger. Caught up in a wicked game with the demon who shadows Jim, Isaac must decide whether the solider in him can believe that true love is the ultimate weapon against evil...

Praise For Crave: A Novel of the Fallen Angels…

Praise for the Novels of the Fallen Angels

“Fans of the Black Dagger Brotherhood clear a shelf: Your next series addiction has just begun.”—Publishers Weekly