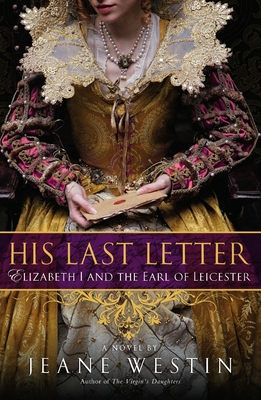 Elizabeth I and the Earl of Leicester

One of the greatest loves of all time-between Elizabeth I and Robert Dudley-comes to life in this vivid novel.

They were playmates as children, impetuous lovers as adults-and for thirty years were the center of each others' lives. Astute to the dangers of choosing any one man, the Virgin Queen could never give her "Sweet Robin" what he wanted most-marriage- yet she insisted he stay close by her side. Possessive and jealous, their love survived quarrels, his two disastrous marriages to other women, her constant flirtations, and political machinations with foreign princes.

His Last Letter tells the story of this great love... and especially of the last three years Elizabeth and Dudley spent together, the most dangerous of her rule, when their passion was tempered by a bittersweet recognition of all that they shared-and all that would remain unfulfilled.

Jeane Eddy Westin is the author of eight books. She lives in Sacramento, California.

Elizabeth I has been portrayed countless times in nov-    els, biographies, movies, and plays. Discuss the different versions of her, and which ones you especially like or   don’t like. How does Elizabeth in His Last Letter measure up to the others?

If a movie were made of His Last Letter, who should  play Elizabeth? Who should play Dudley and the other major characters?

It’s been suggested that Elizabeth loved Dudley but    was so afraid of sex and childbirth that she vowed early     in life that she would never marry. Discuss the emotional and political reasons why she might have made that decision. What were the advantages? The disadvantages?

Discuss the mental process Eizabeth might have undergone to both consummate her love for Dudley and convince herself that she was a virgin queen.

In your mind, should Elizabeth and Dudley’s love be called one of the great love affairs of all time? Must all  great loves remain unful?lled, or is that just an idea fostered by male writers and mythmakers?

Discuss the dynamics of the relationship between Elizabeth and Dudley in His Last Letter. Were they obsessed and emotionally unstable, or do you think their love matured over the years?

What particularly interests you about the Tudor period? Why do you think it’s so popular now?

Discuss the role of Lettice Knollys in the Elizabeth/Dudley relationship.