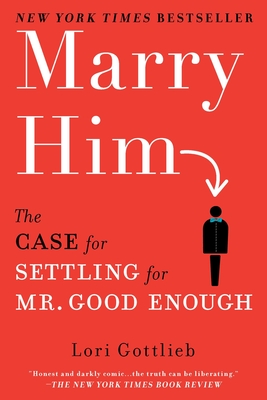 The Case for Settling for Mr. Good Enough

An eye-opening, funny, painful, and always truthful in-depth examination of modern relationships and a wake-up call for single women about getting real about Mr. Right.

You have a fulfilling job, great friends, and the perfect apartment. So what if you haven’t found “The One” just yet. He’ll come along someday, right?

But what if he doesn’t?  Or what if Mr. Right had been, well, Mr. Right in Front of You—but you passed him by? Nearing forty and still single, journalist Lori Gottlieb started to wonder: What makes for lasting romantic fulfillment, and are we looking for those qualities when we’re dating? Are we too picky about trivial things that don’t matter, and not picky enough about the often overlooked things that do?

In Marry Him, Gottlieb explores an all-too-common dilemma—how to reconcile the desire for a happy marriage with a list of must-haves and deal-breakers so long and complicated that many great guys get misguidedly eliminated. On a quest to find the answer, Gottlieb sets out on her own journey in search of love, discovering wisdom and surprising insights from sociologists and neurobiologists, marital researchers and behavioral economists—as well as single and married men and women of all generations.

Praise For Marry Him: The Case for Settling for Mr. Good Enough…

Praise for Marry Him

“An unexpected delight.  Lori Gottlieb offers herself up as Exhibit A—that’s A for ‘Alone’—in this unsparing exploration of the contemporary mating scene. Part cautionary memoir, part field study, her account of her own stalled search for a husband is honest and darkly comic...The truth isn’t pretty, but it can be liberating.”—The New York Times Book Review

“Marry Him shows women how to find true happiness when seeking love—by giving them a new way to look at the world. Gottlieb manages to be hilarious yet thought-provoking, light-hearted yet profound on the questions of: Why do we fall in love? What qualities really matter in a marriage? For what reasons do we make the decisions that affect our whole lives? Marry Him will set people talking for years.”—Gretchen Rubin, New York Times bestselling author of The Happiness Project

“A provocative pop culture treatise...Gottlieb encourages us to think through our own beliefs and unexamined assumptions.”—The Chicago Tribune

Lori Gottlieb is the New York Times bestselling author of Marry Him: The Case for Settling for Mr. Good Enough, Stick Figure: A Diary of My Former Self, and a journalist whose work has appeared in The New York Times, The Atlantic, Time, People, Slate, Self, Glamour, Elle, Salon, and the Los Angeles Times. She is also a frequent commentator for NPR’s All Things Considered.
Loading...
or support indie stores by buying on