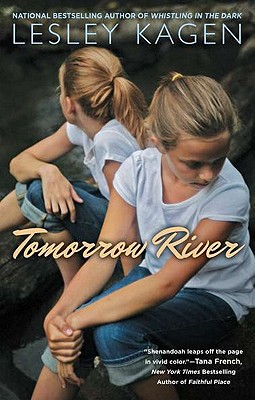 From the national bestselling author of Whistling in the Dark. During the summer of 1968 in Rockbridge County, Virginia, eleven-year- old Shenandoah Carmody's mother disappeared. Her twin sister, Woody, stopped speaking, and her once-loving father slipped into a mean drunkenness unbefitting a superior court judge. As the first anniversary of their mother's disappearance nears, her father's threat to send Woody away and his hints at an impending remarriage spur a desperate Shenny to find her mother-before it's too late.

The story is told through eleven-year-old Shenny’s eyes. What are the limitations of an unreliable narrator’s point of view? What are the advantages? Are there things that Shenny overlooks or perhaps observes that an adult narrator wouldn’t?

Tomorrow River is set in a smallish southern town. Is this a story that could take place anywhere, anytime? Why do you think the author chose this setting?

The late 60s was a time of transition racially and socially in the South. How did the characters react to these changes?

Did Evelyn’s Northern heritage divide the community? Did she influence any of the characters in a positive way?

Shenny and Woody, although identical twins, are so different. Why do you think that is?

Shenny has hope in the face of hopelessness. Have you ever encountered a situation in which you’ve had to be courageous against all odds?

E.J. and Shenny have a complicated relationship. How would you describe it?

How do you think what the twins went through will affect them later in life?

How did you feel about the girls’ grandmother? Their grandfather? Were they victims in their own ways?

Of all the characters, Judge Carmody is perhaps the most conflicted. How would you describe what he was going through?

In life, the strong often dominate the weak. Would you say that’s true in this story or is it more complicated than that?

What part does the character of Beezy play in the story?

What aspects of Shenny’s personality do you admire the most?