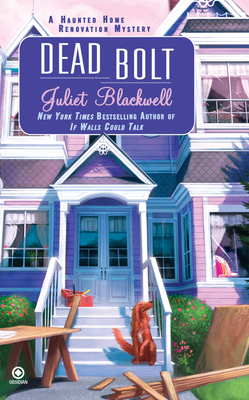 Turner Construction's latest restoration project is a historic Queen Anne Victorian in San Francisco. This time general contractor Mel Turner has to work around the owners who insist on sticking around- along with some ghosts that insist in their own way that the work stops...

The ghosts aren't the only ones standing in the way of the renovations. A crotchety neighbor, Emile Blunt, secretly wants this house, and could be behind some of the disturbances. But when Emile is found dead, it's Mel who appears guilty. Now she must restore the building-and her reputation-before it's too late.

"Cleverly plotted with a terrific sense of the history of the greater Bay Area, Blackwell's series has plenty of ghosts and supernatural happenings to keep readers entertained and off balance." — Library Journal

"In Blackwell's smooth, seductive second mystery featuring San Francisco historic house contractor Melanie Turner (after 2010's If Walls Could Talk), something otherworldly is interfering with Mel's work on Jim and Katenka Daley's 1890s Queen Anne Victorian. Mel must also contend with the elderly neighbor across the street, Emile Blunt, who's determined to buy the Daleys' house, even though it's not for sale. Mel's father, himself a former contractor, tries to smooth things over with the crotchety Emile, only to find him shot dead the next day. Desperate to save her character and her renovation from a murder, Mel may have to dig the truth up about yet another ghost before all is said and done. The return of divorced Mel's old crush, green building expert Graham Donovan, adds romantic interest. Cozy fans will want to see a lot more of the endearing Mel." — Publishers Weekly

Juliet Blackwell is the pseudonym for the New York Times bestselling author of the Haunted Home Renovation Mystery series. She also writes the Witchcraft Mystery series and, together with her sister, wrote the Art Lover’s Mystery series as Hailey Lind. The first in the series, Feint of Art, was nominated for an Agatha Award for Best First Novel. She is also the author of the novels Letters from Paris and The Paris Key. As owner of her own faux-finish and design studio, the author has spent many days and nights on construction sites renovating beautiful historic homes throughout the San Francisco Bay Area.
Loading...
or support indie stores by buying on