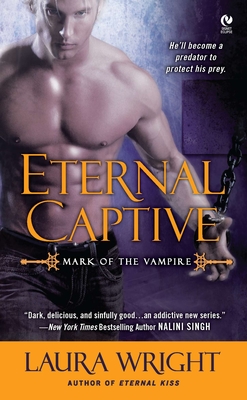 Mark of the Vampire

Lucian Roman knows he must stay away from Bronwyn Kettler for sanity’s sake. Since feeding her his blood, he can think of nothing else but possessing her—fighting an uncontrollable desire to kill her, if need be, and the vampire she has sworn to wed.
Bronwyn, a brilliant vampire genealogist, can never escape her connection to Lucian. He sustained her when she was starving. He still rules her dreams. And when the nights get dark enough, she still craves him. Though his essence still courses through her body, she has found a true mate in someone else.
But when a dangerous enemy threatens Bronwyn, only Lucian—bound to her forever by blood—can save her life. Even if it means sacrificing his own…

Praise For Eternal Captive: Mark of the Vampire…

Praise for the Mark of the Vampire series

Laura Wright is passionate about romantic fiction. Though she has spent most of her life immersed in acting, singing, and competitive ballroom dancing, when she found the world of writing and books and endless cups of coffee, she knew she was home. Laura lives in Los Angeles with her husband, two young children, and three lovable dogs.
Loading...
or
Not Currently Available for Direct Purchase