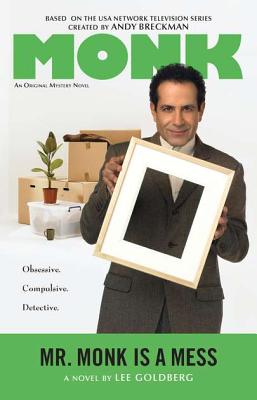 Mr. Monk Is a Mess

"An all-new original mystery starring Adrian Monk, the brilliant investigator who always knows when something's out of place...."

No one likes to come home to a mess least of all Monk and Natalie. But when they return briefly to San Francisco from an extended stay working as cops in New Jersey, Natalie discovers somebody has been sleeping in her bed. But this Goldilocks is not asleep. She's dead.

If that's not bad enough, investigators find marked money from a Federal sting operation stuffed under Natalie's mattress. Now her life is a real mess and she needs Monk's help to clean it up.

But Monk has problems of his own. His brother Ambrose is desperate to find Yuki, his missing lover, but his agoraphobia prevents him from leaving the house. Ambrose needs a man on the outside and that man is Monk, who is torn, because he's glad to see her go.

As the two investigations begin, and the body count rises, it quickly becomes clear to Monk that Yuki has a dangerous past and that they are pursuing a ruthless, cold-blooded killer that nobody would ever want to mess with


Praise For Mr. Monk Is a Mess…

Lee Goldberg has written episodes for the Monk television series, as well as many other programs. He is a two-time Edgar Award nominee and the author of the acclaimed Diagnosis Murder novels, based on the TV series for which he was a writer and executive producer.
Loading...
or support indie stores by buying on
(This book is on backorder)