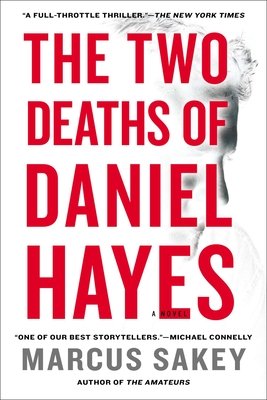 The Two Deaths of Daniel Hayes

A man wakes up naked and cold, half-drowned on an abandoned beach…

The only sign of life for miles is an empty BMW. Inside the expensive car he finds clothes that fit perfectly, shoes for his tattered feet, a Rolex, and an auto registration in the name of Daniel Hayes, resident of Malibu, California.

None of it is familiar. How did he get here? Who is he? While he searches for answers, the world searches for him—beginning with the cops who kick in the door of his dingy motel with drawn guns. All he remembers is a woman’s face, so he leaves town in search of her in hopes of uncovering his true identity. But that raises the most chilling question of all…

What will he find when he gets there?

Praise For The Two Deaths of Daniel Hayes: A Thriller…

“An unpredictable suspense novel that keeps the reader guessing to the end...A full-throttle thriller.”  — The New York Times

“A tight, intuitive, and terrific read. The Two Deaths of Daniel Hayes confirms Marcus Sakey’s place as one of our best storytellers.”   — Michael Connelly

“If you crave sleep, steer clear of Marcus Sakey. Start one of his books at bedtime, and you can forget about slumber…His stories are crisp, cool and utterly convincing, with plots that sweep you up like a midnight raid at a speakeasy. Sakey is also a beautiful prose stylist.” — Chicago Tribune

“The action is fast paced, the tension is nearly constant, and there are more twists in the plot than a double helix. A possible threat to readers’ cardiac health.” — Library Journal (Starred Review)

Marcus Sakey’s thrillers have been nominated for more than fifteen awards, named New York Times Editors' Picks, and selected among Esquire’s Top 5 Books of the Year. His Good People was adapted into a movie starring James Franco, Kate Hudson, and Omar Sy. In addition to Good People, his novels Brilliance, The Blade Itself, and The Amateurs are all in development as feature films.
Loading...
or
Not Currently Available for Direct Purchase