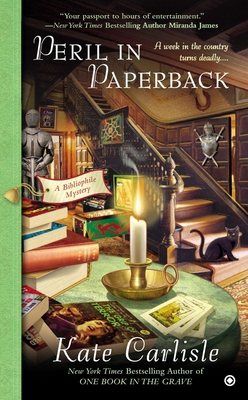 In this novel in the New York Times bestselling Bibliophile Mystery series, bookbinder Brooklyn Wainwright takes a trip to Lake Tahoe and ends up at a killer party...

Rare books and antiquities expert Brooklyn Wainwright is thrilled to be invited to the fiftieth birthday party of her neighbor Suzie’s aunt Grace. A retired founder of a major video game corporation, Grace is a larger-than-life character who’s turned her Lake Tahoe mansion into a fun house, full of everything from pinball machines and giant props to secret passageways and trap doors. Brooklyn is most excited to catalog Grace’s extensive collection of rare paperback pulp fiction.

Part of the fun involves a séance, but after the lights flicker, one guest is dead, poisoned by a cocktail intended for Grace. It seems someone is determined to turn Grace’s playful palatial estate into a house of horrors. Brooklyn suspects the key to the killer’s identity may lie in the roman á clef Grace has written about her life. With Grace in great peril, “must-read” takes on a whole new meaning, as Brooklyn tries to stop a murderer who’s through playing around…

Praise For Peril in Paperback: A Bibliophile Mystery…

“Kate Carlisle never fails to make me laugh, even as she has me turning the pages to see what’s going to happen next.”—Miranda James, New York Times bestselling author of the Cat in the Stacks Mysteries

“Carlisle’s dialogue is natural, her prose has great flow, and her striking descriptions bring Brooklyn’s world to life.”—Crimespree Magazine

“A true whodunit...highlights Carlisle’s story line skills, her love for books, and her always-endearing heroine.”—Richmond Times-Dispatch