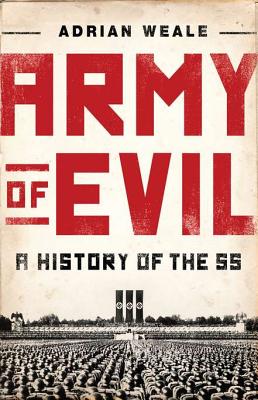 A History of the SS

In Nazi Germany, they were called the Schutzstaffel. The world would know them as the dreaded SS the most loyal and ruthless enforcers of the Third Reich
It began as a small squad of political thugs. Yet by the end of 1935, the SS had taken control of all police and internal security duties in Germany ranging from local village gendarmes all they way up to the secret political police and the Gestapo. And by 1944 the militarized Waffen SS had more than eight hundred thousand men serving in the field, even rivaling Germany's regular armed forces, the Wehrmacht.
In "Army of Evil: A History of the SS," author Adrian Weale delves into materials not previously available, including recently released intelligence files, the most up-to-date research and rare and never-before-published photographs.
Going beyond the myths and characterizations, this comprehensive account reveals the reality of the SS as a cadre of unwavering political fanatics and power-seeking opportunists who slavishly followed an ideology that disdained traditional morality, and were prepared to implement it to the utmost, murderous extreme that ultimately resulted in the Holocaust.
This is a definitive historical narrative of the birth, legacy, and ultimate demise of one of the most feared political and military organizations ever known, and those twisted, cruel men who were responsible for one of the most appalling crimes against humanity in all history.

Praise For Army of Evil: A History of the SS…

“Compelling…Weale elucidates the warped values which enabled this sinister organization to commit some of the worst crimes in recorded history. This is an extremely important book which I recommend most highly.”—Michael Burleigh, author of Moral Combat

“In this landmark history, Adrian Weale tells the twenty-year story of the SS with much brio and authority, and presents a story rich in drama and horror. This is a major achievement by a historian at the top of his game…A meticulous account of the emergence of the SS from its origins as Hitler’s protection squad to the huge, ungainly beast that it became.”—Guy Walters, Literary Review (UK)

Adrian Weale was educated at York University and the Royal Military Academy at Sandhurst. He spent seven years in the regular army as a military intelligence officer, serving Northern Ireland, Germany, Cyprus and Central America. He left in 1992 to pursue a career as a writer. He has published eight works of non-fiction and he writes and reviews regularly for a range of national newspapers. In 2003, he was mobilized for military service in Iraq, where he was appointed Deputy Governor of Dhi Qar Province. In this role, he organized and supervised the first free local elections in Iraqi history in August andSeptember 2003. He remains on active duty."
Loading...
or
Not Currently Available for Direct Purchase