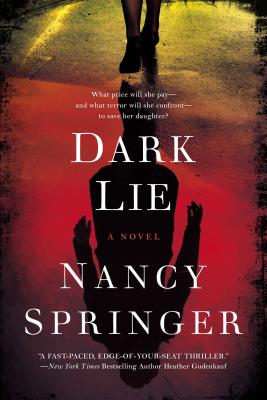 In this gripping psychological thriller--smart, chilling, and unrelenting--Nancy Springer establishes herself as an exciting new suspense writer with a distinctive voice and some surprises up her sleeve...

To their neighbors, Dorrie and Sam Whiteare a contented couple in America’s heartland, with steady jobs, a suburban home, and plenty of community activities to keep them busy. But they’re not quite what they seem. For plain, hard-working Sam hides a depth of devotion for his wife that no one would suspect. And Dorrie is living a lie--beset by physical ailments, alone within herself...and secretly following the comings and goings of the sixteen-year-old daughter, Juliet, she gave up for adoption when she was hardly more than a child herself.

Then one day at the mall, Dorrie watches horror-stricken as Juliet is abducted, forced into a van that drives away. Instinctively, Dorrie sends her own car speeding after it--an act of reckless courage that puts her on a collision course with a depraved killer...and draws Sam into a dogged, desperate search to save his wife. As mother and daughter unite in a terrifying struggle to survive, to what extremes will Dorrie go in overcoming her own limitations...and in confronting her dark, tormented past?

"A truly unique and fascinating heroine."—Alison Gaylin, national bestselling author of And She Was

“A compulsive page turner that will have readers cheering on the decidedly unglamorous heroine, this thriller gets points for making the suburban mom-type the one who saves the day.”—Kirkus Reviews

Nancy Springer has written fifty novels for adults, young adults and children, in genres that include mythic fantasy, contemporary fiction, magical realism, horror, and mystery -- although she did not realize she wrote mystery until she won the Edgar Allan Poe Award from the Mystery Writers of America two years in succession. Dark Lie is her first venture into adult suspense.
Born in New Jersey, Nancy Springer lived for many decades near Gettysburg, Pennsylvania, of Civil War fame, raising two children, writing, riding horseback, fishing, and birdwatching. In 2007 she surprised her friends and herself by moving with her second husband to an isolated area of the Florida panhandle, where the birdwatching is spectacular and where, when fishing, she occasionally catches an alligator.