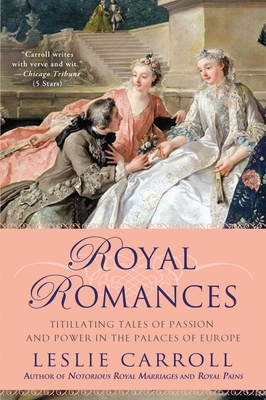 Titillating Tales of Passion and Power in the Palaces of Europe

Elegant palaces, dazzling power plays, shimmering jewels, and the grandest of all-or-nothing gambles—nothing can top real-life love among the royalty. Louis XIV defied God and law, permitting his married mistress Madame de Montespan to usurp the role of Queen of France, then secretly wed her successor, Madame de Maintenon. Grigory Potemkin was a worthy equal in Catherine the Great’s bed as well as in Russia’s political arena. Dashing Count Axel von Fersen risked everything to save Marie Antoinette’s life more than once—and may have returned her passion. The unshakable devotion of the beloved late “Queen Mum” helped King George VI triumph over his, and England’s, darkest hours. And the unpretentious, timelessly glamorous—even relatable—union of Prince William and the former Kate Middleton continues to enthrall the world.

Full of marvelous tales, unforgettable scandals, and bedazzled nobles who refused to rule their hearts, this delightfully insightful book is what the sweetest royal dreams are made of...

Praise For Royal Romances: Titillating Tales of Passion and Power in the Palaces of Europe…

“For those who enjoy reading about the scandals of the noble class, and want to learn more about the darker side of various royal families, this is a thoroughly enjoyable, quick read.” —Booklist