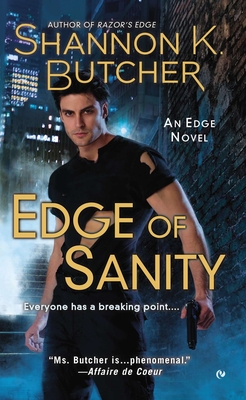 “I NEED TO KNOW IF ANYONE WAS KILLED LAST NIGHT.”

In his years working for the private security firm The Edge, Clay Marshall has seen it all. But the recent blackouts he's been having are new. So is waking up with blood on his hands and clothes, with no memory of where the blood came from—or who he might have killed. He hates to admit it, but he needs help.

Dr. Leigh Vaughn has treated other Edge employees before, but from the moment she sees him for the first time, Clay strikes her as a special breed of man. She knows he’s dangerous, and distrustful of doctors, but she finds herself drawn to him even as his own steely exterior gives way to his growing desire for her.

Neither knows, however, that Clay is being used as a pawn in a larger experiment, and that his blackouts are only the first step toward a terrifying goal. And both Leigh and Clay will put themselves in harm’s way to stop an unseen enemy—and to save one another.

Praise For Edge of Sanity: An Edge Novel…

After spending too many years as an industrial engineer, Shannon K. Butcher learned the skill of writing from her husband, bestselling author Jim Butcher, in order to help him with his stories; she then found the idea of writing her own too compelling to resist. She lives in Missouri with her husband and son, and conversations at the dinner table are more often about things someone made up than about anything that has actually happened.
Loading...
or
Not Currently Available for Direct Purchase