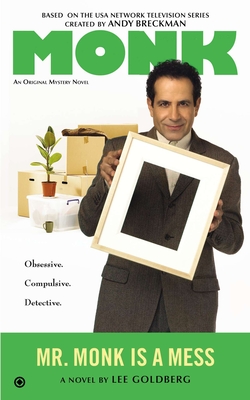 Mr. Monk is a Mess

Welcome to the series of original mysteries starring Adrian Monk, the brilliant investigator who always knows when something's out of place...

No one likes to come home to a mess--least of all Monk and Natalie. But when they return from an extended stay in New Jersey, Natalie discovers that somebody has been sleeping in her bed. But this Goldilocks isn't asleep. She's dead. And stuffed under the mattress, investigators find marked money from a Federal sting operation. Now Natalie's life is a real mess, and she needs Monk to help clean it up.
Meanwhile, Monk's brother Ambrose is desperate to find his missing girlfriend, Yuki--but his agoraphobia prevents him from leaving the house. With Monk forced to do double duty, the body count rises, and so do Monk's suspicions about Yuki's dangerous past...

Praise For Mr. Monk is a Mess…

"Can books be better than television? You bet they can--when Lee Goldberg's writing them."--Lee Child