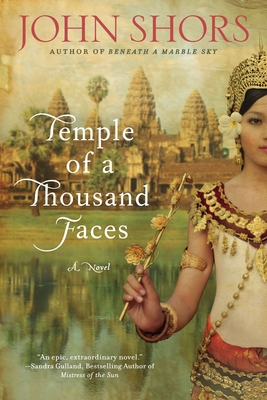 Temple of a Thousand Faces

In his international bestseller Beneath a Marble Sky, John Shors wrote about the ancient passion, beauty, and brilliance that inspired the building of the Taj Mahal. Now with Temple of a Thousand Faces, he brings to life the legendary temple of Angkor Wat, an unrivaled marvel of ornately carved towers and stone statues. There, in a story set nearly a thousand years ago, an empire is lost, a royal love is tested, and heroism is reborn.

When his land is taken by force, Prince Jayavar of the Khmer people narrowly escapes death at the hands of the conquering Cham king, Indravarman. Exiled from their homeland, he and his mystical wife Ajadevi set up a secret camp in the jungle with the intention of amassing an army bold enough to reclaim their kingdom and free their people. Meanwhile, Indravarman rules with an iron fist, pitting even his most trusted men against each other and quashing any hint of rebellion.

Moving from a poor fisherman's family whose sons find the courage to take up arms against their oppressors, to a beautiful bride who becomes a prize of war, to an ambitious warrior whose allegiance is torn--Temple of a Thousand Faces is an unforgettable saga of love, betrayal, and survival at any cost.

Praise For Temple of a Thousand Faces…

"An epic, extraordinary novel about love, beauty, and war, Temple of a Thousand Faces is sure to please."--Sandra Gulland, bestselling author of Mistress of the Sun

"[A] master storyteller..."--Amy Tan, author of The Joy Luck Club

"John Shors has made himself a reputation for recreating exotic landscapes that surround heartwarming stories with captivating details."--BookPage

John Shors is an international bestselling author whose work has been translated into twenty-six languages.