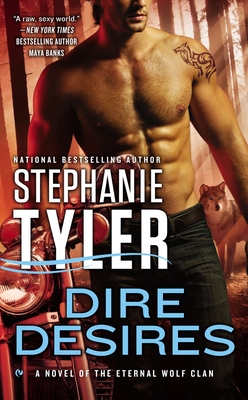 A Novel of the Eternal Wolf Clan

Feared by humans, envied by werewolves, the Dire wolves are immortal shifters, obeying no laws but their own bestial natures. Once they were many, but now only a few remain, a dangerous wolfpack forever on the hunt…

Jinx is a Dire wolf without a pack. Kicked out of the house by his king, and living with a vampire named Jez, Jinx has been trying to undo the damage he’d unintentionally caused during the reign of the Dire ghost army, which unleashed some of Purgatory’s worst monsters on the world at large. But when he hears that an unshifted Were is being held in a psychiatric hospital, he immediately drops everything to help her.

Gillian Black has no idea what’s happening to her—and Jinx discovers that she’s not just any Were, but a Dire wolf from the original Greenland pack. He helps her escape and promises to keep her safe from the men—and wolves—who are hunting her, and teach her everything about being a wolf.

He must also fight his feelings, wanting to claim her as his mate…at least until after he defeats the supernatural enemies that threaten all of them.

Praise For Dire Desires: A Novel of the Eternal Wolf Clan…

Praise for Stephanie Tyler and the Dire Wolves

Stephanie Tyler is the New York Times extended bestselling author of the Eternal Wolf Clan series as well as three military romantic suspense series. She lives in New York with her husband, kids, and a crazy Weimaraner named Gus.
or support indie stores by buying on