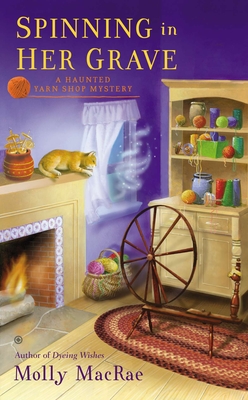 Spinning in Her Grave

Kath Rutledge is settling in as the owner of the Weaver’s Cat, a fiber and fabric shop in Blue Plum, Tennessee. But nothing, not even the ghost haunting her shop, prepares her for the mystery that will leave the whole town spinning....

It’s time for Blue Plum’s annual historical festival, and everyone—including Kath and her spunky fiber and needlework group, TGIF—is getting in on the action. Expert spinners are being gathered, and a businessman has approached Kath about using the second-floor windows of her store for part of a reenactment. But the reenactment ends in real-life bloodshed when local baker Reva Louise Snapp is shot—with a bullet from a modern-day gun.

Kath has her theories about who wanted to end Reva Louise’s life. But there’s also talk of a sniper stalking Blue Plum, and Kath’s shop is suspected to be the murderer’s hideout. Now Kath, her TGIF pals, and the gloomy ghost, Geneva, must unravel the mystery quickly, or someone else might be left hanging by a thread....

Praise For Spinning in Her Grave: A Haunted Yarn Shop Mystery…

Praise for Last Wool and Testament

“A great start to a new series! By weaving together quirky characters, an interesting small-town setting, and a ghost with a mind of her own, Molly MacRae has created a clever yarn you don’t want to end.”—Betty Hechtman, national bestselling author of For Better or Worsted

“A delightful paranormal regional whodunit that…accelerates into an enjoyable investigation. Kath is a fascinating lead character.”—Genre Go Round Reviews

“Suspense and much page flipping!…I loved the characters, the mystery; everything about it was pitch-perfect!”—Cozy Mystery Book Reviews

Molly MacRae, author of the Haunted Yarn Shop Mystery series, including Dyeing Wishes and Last Wool and Testament, was director of the history museum in Jonesborough, Tennessee’s oldest town, and later managed an independent bookstore in Johnson City. Her short stories have appeared in Alfred Hitchcock Mystery Magazine for more than twenty years, and she has won the Sherwood Anderson Award for Short Fiction.
Loading...
or support indie stores by buying on