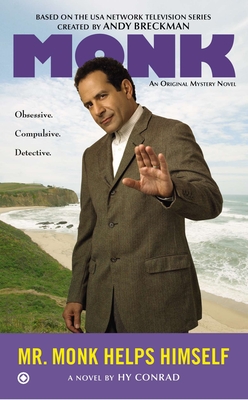 Natalie is taking a break from studying for her PI license—the last step to becoming Monk’s full partner. She sneaks off to Half Moon Bay for a retreat run by Miranda Bigley, leader of the Best Possible Me self-help program, but her plans for a relaxing weekend are disrupted when Monk tracks her down to rescue her from the “cult.” Their argument is cut short when Miranda, in full view of everyone, calmly walks to the edge of a cliff and jumps.

Even though Miranda’s death looks like suicide, Natalie is sure it's murder. But Monk brushes her off to help the SFPD solve the murder of a clown, despite his coulrophobia, aka fear of clowns. As Monk and Natalie begin their independent investigations, they quickly learn that if they want to figure out whodunit, they will have to find a way to become true partners....

Praise For Mr. Monk Helps Himself…

Praise for the Monk Mysteries:

"An entertaining and ruefully funny diversion that stars one of television's best-loved characters."--Honolulu Star Bulletin