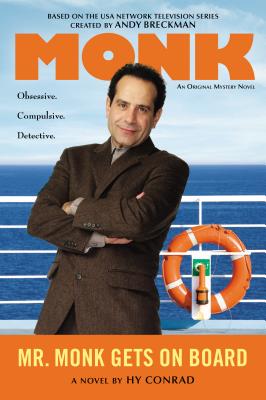 Mr. Monk Gets on Board

Hy Conrad, Andy Breckman (Based on a TV Series)

Obsessive. Compulsive. Detective.
"An all-new original mystery starring Adrian Monk, the brilliant investigator who always knows when something's out of place..."
Of all the things that make Adrian Monk uneasy, change ranks high on the list. So when Natalie completes her P.I. license--and technically becomes Monk's boss--it's not easy for him to accept. Nor can he accept Natalie attending a business seminar at sea without him, even if it means spending a week with her on a cruise ship.
Between choppy waters and obnoxious kids, Monk finds himself in a perfect storm of anxiety. Luckily, Mariah, the cruise director, is always able to smooth things over...until someone pulls the man overboard alarm, the ship drops anchor--and the crew fishes Mariah's dead body out of the water.
Finding alcohol in Mariah's system, the ship's doctor declares her death an accident, but Monk isn't convinced. He knows that Mariah and the captain were having an affair. Could someone have pushed her overboard?
When the captain hires Monk and Natalie to look into a mysterious rash of vandalism onboard, Monk steers the investigation toward murder...


Praise For Mr. Monk Gets on Board…

“Some of the very best mystery novels being published today, period.”—Rough Edges

“Even if you aren’t familiar with the TV series Monk, this book is too funny to not be read.”—The Weekly Journal (TX)

“Entertaining and ruefully funny...stars one of television’s best-loved characters.”—Honolulu Star-Bulletin

“Full of snippets of slapstick humor and Monk’s special talents for observation.”—Library Journal

Hy Conrad was one of the original writers on the USA Network television series "Monk" and stayed with the series for all eight seasons, acting as co-executive producer for the last two seasons and garnering three Edgar(R) Award nominations. In addition, Hy was head writer of the webisode series "Little Monk" and served as consulting producer and writer on the USA series "White Collar." He is the author of hundreds of short stories, dozens of interactive mysteries, and ten books of solvable whodunits, sold around the world in fourteen languages.
Loading...
or
Not Currently Available for Direct Purchase