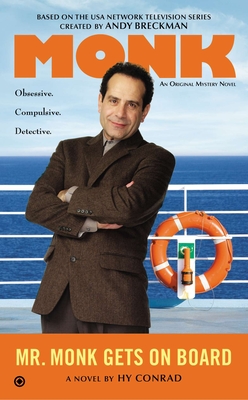 Mr. Monk Gets on Board

Of all the things that make Adrian Monk uneasy, change ranks high on the list. So when Natalie completes her P.I. license—and technically becomes Monk’s boss—it’s not easy for him to accept. Nor can he accept Natalie attending a business seminar at sea without him, even if it means spending a week with her on a cruise ship.

Between choppy waters and obnoxious kids, Monk finds himself in a perfect storm of anxiety. Luckily, Mariah, the cruise director, is always able to smooth things over…until the crew fishes her dead body out of the water.

Even after the ship’s doctor declares Mariah’s death an accident, Monk isn’t convinced. So when the captain hires Monk and Natalie to look into a mysterious rash of vandalism on board, Monk steers the investigation toward murder.…

Praise For Mr. Monk Gets on Board…

PRAISE FOR THE MONK MYSTERIES

“As always, Lee [Goldberg] does a perfect job of bringing these characters to life on the page for Monk fans. It’s like watching a Monk episode in your head.”—Kings River Life Magazine

Mr. Monk Is a Mess

“I’ve mentioned time and again how much I’ve enjoyed these books, and this one’s no exception. It’s very funny, and it marks another step in the changes that have been occurring as the series progresses.”—Bill Crider, author of Murder in the Air

“Tie-in novels are tremendously fun to read.…The Monk novels definitely bring that element to the reader and more. Lee Goldberg continues to unfold and mature the character of Adrian Monk.…The characterization is charming—the characters keep us laughing and manage to touch our hearts just a bit. The book is…a delight.”—MyShelf.com

Mr. Monk on the Couch

“The Monk books are always wonderful fun and this one is no exception.”—Kings River Life Magazine