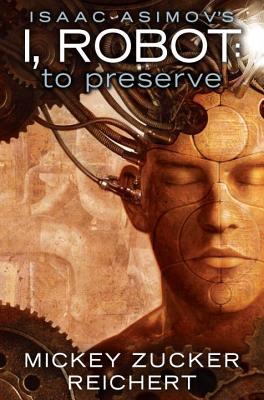 2037: Robotic technology has evolved into the realm of self-aware, sentient mechanical entities. But despite the safeguards programmed into the very core of a robot’s artificial intelligence, humanity’s most brilliant creation can still fall prey to those who believe the Three Laws of Robotics were made to be broken...

N8-C, better known as Nate, has been Manhattan Hasbro Hospital’s resident robot for more than twenty years. A prototype, humanoid in appearance, he was created to interact with people. While some staff accepted working alongside an anthropomorphic robot, Nate’s very existence terrified most people, leaving the robot utilized for menial tasks and generally ignored.

Until one of the hospital’s physicians is found brutally murdered with Nate standing over the corpse, a blood-smeared utility bar clutched in his hand. As designer and programmer of Nate’s positronic brain, Lawrence Robertson is responsible for his creation’s actions and arrested for the crime.

Susan Calvin knows the Three Laws of Robotics make it impossible for Nate to harm a human being. But to prove both Nate’s and Lawrence’s innocence, she has to consider the possibility that someone somehow manipulated the laws to commit murder...

Praise For Isaac Asimov's I, Robot: To Preserve…

Praise for I, Robot: To Protect

“A thrilling climax provides plenty of action and excitement, forcing all to examine their values and to take action in an untenable situation.”—SFRevu

“Reichert not only manages to be true to Asimov’s vision but manages to write a story that is enjoyable even if you had never heard of Isaac before.”—Blogcritics Magazine

Mickey Zucker Reichert is a working physician and the author of Isaac Asimov’s I, Robot Trilogy (To Protect, To Obey, To Preserve). She lives in Iowa with her husband and two of their children and divides her time between taking care of her family, writing, practicing medicine, teaching at the local university, and tending the assorted livestock that roam her forty-acre farm.
Loading...
or
Not Currently Available for Direct Purchase