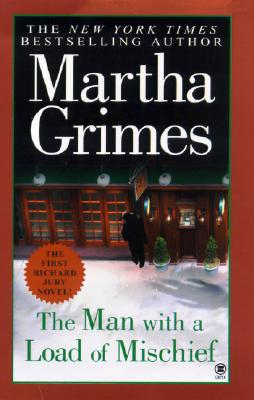 The Man with a Load of Mischief (Richard Jury Mystery #1)

At the Man with a Load of Mischief, they found the dead body stuck in a keg of beer. At the Jack and Hammer, another body was stuck out on the beam of the pub’s sign, replacing the mechanical man who kept the time. Two pubs. Two murders. One Scotland Yard inspector called in to help. Detective Chief Inspector Richard Jury arrives in Long Piddleton and finds everyone in the postcard village looking outside of town for the killer. Except for one Melrose Plant. A keen observer of human nature, he points Jury in the right direction: into the darkest parts of his neighbors’ hearts…

“[Grimes’s novel] is cast in the mold of the great British mysteries and comes complete with all the classic elements.”—The San Diego Union

Martha Grimes is the bestselling author of eighteen Richard Jury mysteries and also the acclaimed fiction Foul Matter, Cold Flat Junction, Hotel Paradise, The End of the Pier, and The Train Now Departing.
Loading...
or
Not Currently Available for Direct Purchase