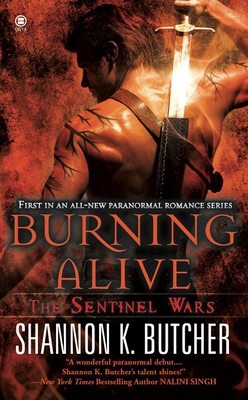 Caution : readers may feel the heat coming off the pages.

They are the Sentinels...

Three races descended from ancient guardians of mankind, each possessing unique abilities in their battle to protect humanity against their eternal foes-the Synestryn. Now, one warrior must fight his own desire if he is to discover the power that lies within his one true love...

Helen Day is haunted by visions of herself surrounded by flames, as a dark-haired man watches her burn. So when she sees the man of her nightmares staring at her from across a diner, she attempts to flee-but instead ends up in the man's arms. There, she awakens a force more powerful and enticing than she could ever imagine. For the man is actually Theronai warrior Drake, whose own pain is driven away by Helen's presence.

After spending too many years as an industrial engineer, Shannon learned to write from her husband, bestselling author Jim Butcher. She learned writing craft in order to help him with his stories, but found the idea of writing her own too compelling to resist. She lives in Missouri with her husband and son, where conversations at the dinner table are more often about things someone made up than about anything that’s actually happened. Feel free to contact Shannon via her website.
Loading...
or
Not Currently Available for Direct Purchase