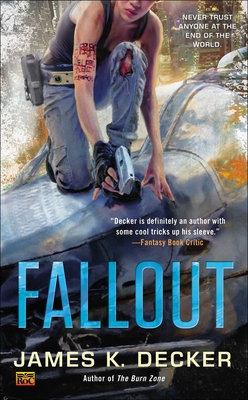 Overpopulation, disease, and ecological disaster were edging humanity toward extinction. Hope arrived in the haan, an alien race that promised us a future.
And what they wanted in exchange seemed so harmless...

Sam Shao has found out too much about the haan, by accident. All humans have to get along with them—we owe them our lives—and Sam even counts a haan among her best friends. But the more she learns, the less she trusts them

It doesn’t help that the building of new haan colonies seems to be coinciding with a rash of missing persons cases. Sam and her hacker friends are determined to reveal the truth about the haan, before it’s too late. The aliens are still promising salvation, and they seem set to deliver, but with things already spinning out of control Sam is confronted with a possibility no one wants to admit—that what salvation means to humankind and what it means to the haan may be two horribly different things.

Praise For Fallout (A Haan Novel)…

Praise for The Burn Zone

“Between the bone-crack tension, the fertile cascade of ideas, and the neon-bright setting, The Burn Zone is a hell of a ride.”—National Bestselling Author Richard Kadrey

“A thought-provoking thrill ride that evokes themes touched upon by the novels of Octavia Butler and films like District 9 and Minority Report, and Dark City. The Burn Zone surprised me with its depth and Decker’s ability to tell an intimate story…with a more grand backdrop and potential to take a larger series to many different places. An early contender for one of the top SF novels of 2013.”—SFFWorld

“With a tricky plot, a fascinating alien race, and a resourceful heroine whose story deserves many follow-ups, this series debut should please fans of Peter Hamilton, William C. Dietz, and John Scalzi.”—Library Journal

“[A] fast-paced world…grounded and plausible, taking equal parts District 9 and Arthur C. Clarke’s Childhood’s End…and it hits a lot of the right buttons. It’s got plenty of action, a cast of smart characters, [and] an intriguing plot.”—GeekExchange.com

“Excellent world-building…James K. Decker is definitely an author with some cool tricks up to his sleeve…I for one will definitely be reading the sequel to see how he further develops the story and the world.”—Fantasy Book Critic

“It's amazing…possibly the best science-fiction book I've come across in practically forever.”—BlogCritics.org

“An adrenaline rush and the twist presented in the last chapter leaves you wanting more.”—Addicted2Heroines.com

James K. Decker grew up in New England and lives in Massachussetts. He is the author of The Burn Zone.
Loading...
or
Not Currently Available for Direct Purchase