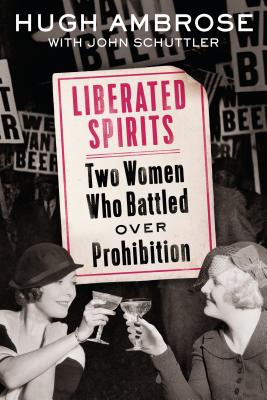 Two Women Who Battled Over Prohibition

A provocative new take on the women behind a perennially fascinating subject--Prohibition--by bestselling author and historian Hugh Ambrose.

The passage of the 18th Amendment (banning the sale of alcohol) and the 19th (women's suffrage) in the same year is no coincidence. These two Constitutional Amendments enabled women to redefine themselves and their place in society in a way historians have neglected to explore. Liberated Spirits describes how the fight both to pass and later to repeal Prohibition was driven by women, as exemplified by two remarkable women in particular.

With fierce drive and acumen, Mabel Willebrandt transcended the tremendous hurdles facing women lawyers and was appointed Assistant Attorney General. Though never a Prohibition campaigner, once in office she zealously pursued enforcement despite a corrupt and ineffectual agency.

Wealthy Pauline Sabin had no formal education in law or government but she too fought entrenched discrimination to rise in the ranks of the Republican Party. While Prohibition meant little to her personally--aristocrats never lost access to booze--she seized the fight to repeal it as a platform to bring newly enfranchised women into the political process and compete on an equal footing with men.

Along with a colorful cast of supporting characters, from rumrunners and Prohibition agents on the take to senators and feuding society matrons, Liberated Spirits brings the Roaring Twenties to life in a brand new way.

Praise For Liberated Spirits: Two Women Who Battled Over Prohibition…

“Raises fascinating questions about the role of women in early-20th-century politics. . .A rewardingly intricate account of how one political issue shaped several lives.”—Kirkus Reviews

"An important, timely look at an era that is usually remembered for its speakeasies and flappers." -- Wall Street Journal

"Rightly places women in the center of the Prohibition debate while providing a well-researched, fast-paced narrative. . .A must-read." --Library Journal

"Those looking for the political history of Prohibition will value this comprehensive accounting. " --Booklist

Hugh Ambrose was a noted historian and the bestselling author of The Pacific: Hell Was an Ocean Away. He passed away in 2015 after completing this book. John Schuttler is a consulting historian, researching and writing on numerous topics for dozens of clients in the public and private sectors.
Loading...
or
Not Currently Available for Direct Purchase