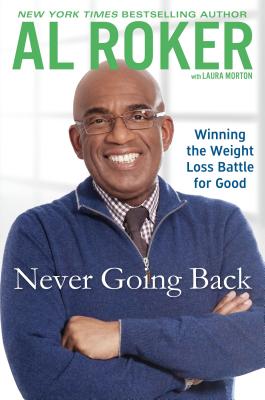 Winning the Weight-Loss Battle for Good

Al Roker's "aha "moment came a decade ago. He was closing in on 350 pounds when he promised his dying father that he wasn t going to keep living as he was. That led to his decision for a stomach bypass and his life-changing drop to 190. But fifty of those pounds gradually crept back until he finally devised a plan, stuck to it, and got his life back.
"Never Going Back" is Roker's inspiring, candid, and often hilarious story of self-discovery, revealing a (now slimmer) side of his life that no one knows. With illuminating and sometimes painfully honest stories about his childhood (as the husky boy in class), his struggle against the odds to make something of himself, and his family life today, Roker reveals the effects that a lifelong battle with weight issues can have on a person and how, regardless of the frustration and setbacks, you must never lose faith in yourself (just inches).
Al is telling his story to inspire others to lose the weight they ve always wanted to lose, keep it off for good, and regain their health. He knows firsthand that it is a day-to-day process and that unrealistic diets rarely work (he has tried most of them ). And, most important, he knows that losing weight is as much if not more a state of mind as of body. That's why he's here: to recharge your willpower and see you through it like a friend with warmth, humor, and a healthy new outlook on life.

Al Roker is known to more than thirty million TV viewers, and he is the recipient of thirteen Emmy Awards, ten of which he won for his work on NBC s "Today. "He is the "New York Times" bestselling author of "Don t Make Me Stop This Car!: Adventures in Fatherhood. "An accomplished cook, Roker also has two bestselling cookbooks to his credit. Al Roker lives in Manhattan with his wife, ABC News and 20/20 correspondent Deborah Roberts, and has two daughters and a son."