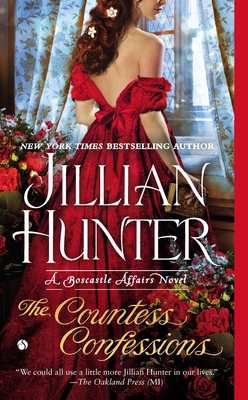 All Emily Selwick wanted was to convince the man she had adored for years that she was the woman he ought to marry. She never expected that her ill-fated deception at a party would uncover a scheme against the Crown and ensnare her in the sensual trap of an enigmatic stranger.

Damien Boscastle, the Earl of Shalcross, knows he must marry Emily to defend her honor and keep his mission secret. But, by saving her reputation, he will draw her into his arms as well as a dangerous intrigue.

After a whirlwind courtship that leaves her breathless, Emily finds herself wed to a husband who vows not only to protect her from his menacing world—but to train his wife in the pleasures of passion.

Jillian Hunter is the author of more than twenty critically acclaimed novels, including the Bridal Pleasures series: The Duchess Diaries, A Bride Unveiled, and A Duke's Temptation. The Countess Confessions marks the thirteenth Boscastle Regency romance, following The Mistress Memoirs. Jillian's  The Wicked Duke Takes a Wife and A Wicked Lord at the Wedding are New York Times bestsellers. She has received several awards, including the Romantic Times Career Achievement Award. She lives in Southern California with her husband and three daughters.

Praise For The Countess Confessions (A Boscastle Affairs Novel #2)…

Praise for Jillian Hunter and her novels

“We could all use a little more Jillian Hunter in our lives.”—The Oakland Press (MI)

“Hunter knows how to combine sensual romance with a mystery, and passion with tenderness.”—Romantic Times

“Hunter draws the reader in with a compelling plot and engaging characters in this smoothly written tale of love lost and found.”—Publishers Weekly

“One of the funniest, most delightful romances I've had the pleasure to read.”—Teresa Medeiros, New York Times bestselling author of The Temptation of Your Touch