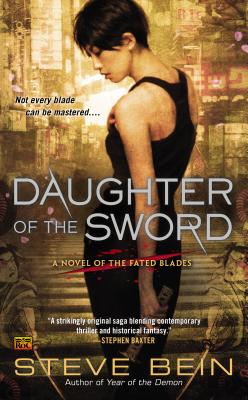 Daughter of the Sword

A Novel of the Fated Blades

As the only female detective in Tokyo’s most elite police unit, Mariko Oshiro has to fight for every ounce of respect, especially from her new boss. But when he gives her the least promising case possible—the attempted theft of an old samurai sword—it proves more dangerous than anyone on the force could have imagined.

The owner of the sword, Professor Yasuo Yamada, says it was crafted by the legendary Master Inazuma, a sword smith whose blades are rumored to have magical qualities. The man trying to steal it already owns another Inazuma—one whose deadly power eventually comes to control all who wield it.

Mariko’s investigation has put her on a collision course with a curse centuries old and as bloodthirsty as ever. She is only the latest in a long line of warriors and soldiers to confront this power, and even the sword she learns to wield could turn against her.

Praise For Daughter of the Sword: A Novel of the Fated Blades…

“One of the best debuts I have ever read…an epic tale that heralds the emergence of a major talent.”—Fantasy Book Critic

“Authentic and riveting.”—Kylie Chan, author of Heaven to Wudang

Steve Bein teaches Asian philosophy and Asian history at the State University of New York, Geneseo. He holds a PhD in philosophy and holds four degrees of black belt, having studied both philosophy and martial arts for about twenty years each. His short fiction has appeared in Asimov's, Interzone, and Writers of the Future. Daughter of the Sword is his first novel.
Loading...
or
Not Currently Available for Direct Purchase