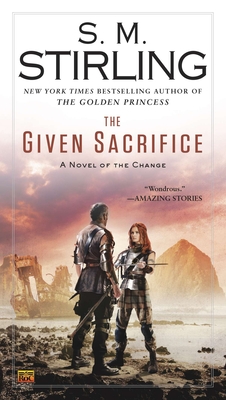 The Given Sacrifice (A Novel of the Change #10) (Paperback)

Rudi Mackenzie has won the battle that expelled the enemy from the new High Kingdom of Montival. Now he must free the people who live in the state once known as Idaho from occupation by the legions of the Church Universal and Triumphant and pursue them to their lair over the mountains. There he will finally confront the forces behind the Church—the Powers of the Void.

Yet even a victory will not end the conflict forever. The Powers of the Void are malevolent and infinitely patient, and the struggle is one that involves the entire world. They threaten not only Rudi in the present, but also the future represented by his children, Órlaith and John. Rudi knows this.

And as his heir Princess Órlaith grows up in the shadow of her famous father, she also realizes that the enemy will do anything to see that she does not live to fulfill her parents’ dream….

S. M. Stirling is the author of many science fiction and fantasy novels, including the Novels of the Change (The Golden Princess, Lord of Mountains, The Tears of the Sun, The High King of Montival, The Sword of the Lady, The Scourge of God, and The Sunrise Lands).

Praise For The Given Sacrifice (A Novel of the Change #10)…