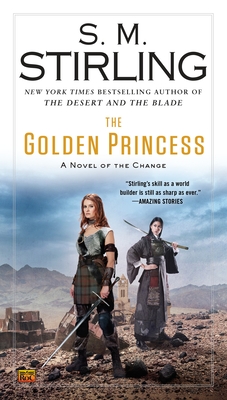 The Golden Princess (A Novel of the Change #11) (Paperback)

The New York Times bestselling author of The Given Sacrifice begins a new saga—with a new generation of heroes—set in the universe of the Change....

Princess Órlaith, heir to Rudi Mackenzie, High King of Montival, now wields the Sword of the Lady—and faces a new enemy. Fortunately, she also has a new ally in Reiko, Empress of Japan, who has been pursued to America by a conquering army from Asia.

To combat their mutual foe, Órlaith and Reiko embark on a quest to find the fabled Kusanagi-no-Tsurugi, the Grass-Cutting Sword, one of the three great treasures of the Japanese Imperial House. But the road to Kusanagi lies beyond the meganecropolis of the City of Angels—and their relentless enemy will stop at nothing to prevent them from succeeding.

For across the Pacific, the great arc of land that stretches from the dark kingdom of Korea to the realm of Capricornia in Australia is threatened by war. Now all the survivors of the Change must choose sides....

S. M. Stirling is the New York Times bestselling author of many science fiction and fantasy novels, including the Novels of the Change (The Given Sacrifice, Lord of Mountains, Tears of the Sun).

Praise For The Golden Princess (A Novel of the Change #11)…

“Occasionally a book comes along that makes you stop and put down anything else you are working on so you can read it. For me that was The Golden Princess…Fans of Stirling and the Emberverse series will be satisfied by this new chapter. Stirling’s skill as a world builder is still as sharp as ever.”—Amazing Stories

“Stirling’s books have a structural similarity to many of Harry Turtledove’s best sagas, and even, I’d say, the writing of James Michener…This is a unique series, an unusually complex world, and one well worth exploring.”—Bookworm Blues
or support indie stores by buying on
Copyright © 2020 American Booksellers Association