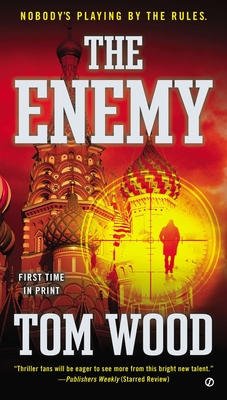 Victor, a former assassin-for-hire, has joined forces with a CIA special unit. His first assignment: Three strangers. Three hits. Fast and clean. Victor’s a natural for this.

It should have been simple. But with each hit Victor is plunged deeper into an unimaginable conspiracy where no one, least of all the people he knows, can be trusted.

THE TRIPLE-CROSS YOU WON’T SEE COMING.

With the stakes growing higher by the minute, Victor realizes he’s been forced into playing a game he never expected. Because he’s the next target. And there’s no way out.

Tom Wood was born and raised in Staffordshire, England, and now lives in London.

“The scenes are vivid and the plot revelations parceled out at expert intervals...An impressively intricate thriller...Exciting.”—The New Yorker

“A superlative fiction debut. Non-stop action that veers and twists from one explosive gun battle, betrayal and double cross to the next...Thriller fans will be eager to see more from this bright new talent.”—Publishers Weekly (starred review)

“A must for thriller fans.”—Shots Mag

“Crackles like the early work of Robert Ludlum...Wood brings an appealing and enigmatic main character into the mix, creating a refreshing and relentless story line.”—Booklist

“This bang-up thriller is just begging for the big screen.”—Library Journal
or support indie stores by buying on
Copyright © 2020 American Booksellers Association