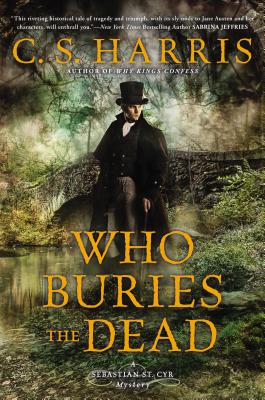 The grisly murder of a West Indies slave owner and the reappearance of a dangerous enemy from Sebastian St. Cyr’s past combine to put C. S. Harris’s “troubled but compelling antihero” (Booklist) to the ultimate test in this taut, thrilling mystery.

London, 1813. The vicious decapitation of Stanley Preston, a wealthy, socially ambitious plantation owner, at Bloody Bridge draws Sebastian St. Cyr, Viscount Devlin, into a macabre and increasingly perilous investigation. The discovery near the body of an aged lead coffin strap bearing the inscription King Charles, 1648 suggests a link between this killing and the beheading of the deposed seventeenth-century Stuart monarch. Equally troubling, the victim’s kinship to the current Home Secretary draws the notice of Sebastian’s powerful father-in-law, Lord Jarvis, who will exploit any means to pursue his own clandestine ends.

Working in concert with his fiercely independent wife, Hero, Sebastian finds his inquiries taking him from the wretched back alleys of Fish Street Hill to the glittering ballrooms of Mayfair as he amasses a list of suspects who range from an eccentric Chelsea curiosity collector to the brother of an unassuming but brilliantly observant spinster named Jane Austen.

But as one brutal murder follows another, it is the connection between the victims and ruthless former army officer Sinclair, Lord Oliphant, that dramatically raises the stakes. Once, Oliphant nearly destroyed Sebastian in a horrific wartime act of carnage and betrayal. Now the vindictive former colonel might well pose a threat not only to Sebastian but to everything—and everyone—Sebastian holds most dear.

Praise For Who Buries the Dead (Sebastian St. Cyr Mystery #10)…

“As Devlin’s personal life has become richer and fuller, with his deepening love for wife Hero and infant son Simon, so has this novel, the tenth in the series featuring St. Cyr. With such well-developed characters, intriguing plotlines, graceful prose, and keen sense of time and place based on solid research, this is historical mystery at its best.”—Booklist, starred review

“This riveting historical tale of tragedy and triumph, with its sly nods to Jane Austen and her characters, will enthrall you!”—Sabrina Jeffries, New York Times bestselling author of How the Scoundrel Seduces

“Draws Sebastian St. Cyr and his wife, Hero, into greater danger than ever before. Unbearably exciting, filled with historical details, multiple suspects and, unexpectedly, Jane Austen, the reader will not be able to put this down.”—Romantic Times, Top Pick

“The solution, one of Harris’s trickiest, will appeal both to fair-play fans and those interested in a vivid evocation of the period.”—Publishers Weekly