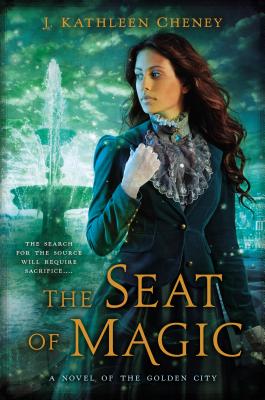 The Seat of Magic (A Novel of the Golden City #2)

Magical beings have been banned from the Golden City for decades, though many live there in secret. Now humans and nonhumans alike are in danger as evil stalks the streets, growing more powerful with every kill….

It’s been two weeks since Oriana Paredes was banished from the Golden City. Police consultant Duilio Ferreira, who himself has a talent he must keep secret, can’t escape the feeling that, though she’s supposedly returned home to her people, Oriana is in danger.

Adding to Duilio’s concerns is a string of recent murders in the city. Three victims have already been found, each without a mark upon her body. When a selkie under his brother’s protection goes missing, Duilio fears the killer is also targeting nonhuman prey.

To protect Oriana and uncover the truth, Duilio will have to risk revealing his own identity, put his trust in some unlikely allies, and consult a rare and malevolent text known as The Seat of Magic….

“[A] killer sequel…Intriguing and fun, the mystery unfolds like a socially conscious tour through a cabinet of curiosities.”—Kirkus Reviews

“Those who enjoy alternate history, Edwardian- or Victorian-era historical fiction with a touch of magic and mythology, will be delighted with this story.”—Booklist

“Political thriller, serial-killer mystery, gaslight alternate history, paranormal romance …This is not your everyday paranormal mystery-thriller. It has a sinuous charm that wraps itself around the reader, soft but impressive…These characters glisten with humanity, even if they aren’t really human.”—Kings River Life

J. Kathleen Cheney is a former teacher and has taught mathematics ranging from seventh grade to calculus, with a brief stint as a gifted and talented specialist. Her short fiction has been published in such venues as Fantasy Magazine and Beneath Ceaseless Skies, and her novella “Iron Shoes” was a Nebula Finalist in 2010. She is the author of The Golden City.
Loading...
or
Not Currently Available for Direct Purchase