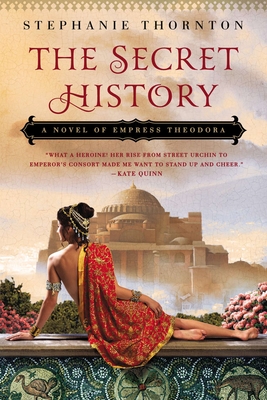 A Novel of Empress Theodora

In sixth-century Constantinople, one woman, Theodora, defied every convention and all the odds and rose from common theater tart to empress of a great kingdom, the most powerful woman the Roman Empire would ever know. The woman whose image was later immortalized in glittering mosaic was a scrappy, clever, conniving, flesh-and-blood woman full of sensuality and spirit whose real story is as surprising as any ever told….

After her father dies suddenly, Theodora and her sisters face starvation and a life on the streets. Determined to survive, Theodora makes a living any way she can—first on her back with every man who will have her, then on the stage in a scandalous dramatization of her own invention. When her daring performance grants her a backdoor entry into the halls of power, she seizes the chance to win a wealthy protector—only to face heartbreak and betrayal.

Ever resilient, Theodora rises above such trials and, by a twist of fate, meets her most passionate admirer yet: the emperor’s nephew. She thrives as his confidant and courtesan, but many challenges lie ahead. For one day this man will hand her a crown. And all the empire will wonder—is she bold enough, shrewd enough, and strong enough to keep it?

Praise For The Secret History: A Novel of Empress Theodora…

“Stephanie Thornton’s Theodora is tough and intelligent, spitting defiance against the cruel world of the Byzantine Empire. Her rise from street urchin to emperor’s consort made me want to stand up and cheer. Her later years as empress are great fun to read, but it was her early struggle as actress and courtesan that really had me roaring: either with rage at the misfortunes heaped on this poor girl, or with delight as she once more picked herself up with a steely glint in her eye and kept on going.”—Kate Quinn, author of Empress of the Seven Hills

Stephanie Thornton is a writer and history teacher who has been obsessed with infamous women from ancient history since she was twelve. She lives with her husband and daughter in Alaska, where she is at work on her next novel.

What did you enjoy most about The Secret History? Who is your favorite character?

What do you think of Theodora? What do you see as her greatest strengths and flaws? When does she win your admiration and when does she earn your disapproval?

What role does luck play in Theodora’s life?

Is Theodora a good mother? Is Antonina a better one?

When Macedonia pleads for Theodora’s help after an earth-quake leaves her destitute, Theodora deliberately decides not to help. Discuss why she makes this choice and how it comes to haunt her. Would you have done the same?

What do you think makes Theodora and Justinian’s marriage so successful?

Justinian is a dedicated ruler. Is he an effective one? Discuss the tactics he uses to acquire and retain power. Do they interfere with his ability to rule wisely?

Can you imagine living in Constantinople in the fifth century AD? What kind of life do you think you would have there? What would you most like and most dislike about living in that time and place?

Plague had a devastating effect on the Byzantine Empire. Discuss what you imagine the world of today would be like if half the population was suddenly wiped out by illness.

Have you traveled to any of the places mentioned in the novel, in particular to Istanbul, the current name for the city that was once Constantinople? How do the places you experienced compare to the way they’re described in the book?

What do you hope to remember about this novel?