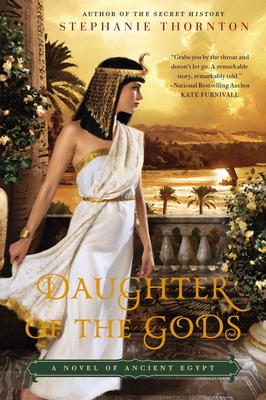 Daughter of the Gods

Egypt, 1400s BC. The pharaoh’s pampered second daughter, lively, intelligent Hatshepsut, delights in racing her chariot through the marketplace and testing her archery skills in the Nile’s marshlands. But the death of her elder sister, Neferubity, in a gruesome accident arising from Hatshepsut’s games forces her to confront her guilt...and sets her on a profoundly changed course.

Hatshepsut enters a loveless marriage with her half brother, Thut, to secure his claim to the Isis Throne and produce a male heir. But it is another of Thut’s wives, the commoner Aset, who bears him a son, while Hatshepsut develops a searing attraction for his brilliant adviser Senenmut. And when Thut suddenly dies, Hatshepsut becomes de facto ruler, as regent to her two-year-old nephew.

Once, Hatshepsut anticipated being free to live and love as she chose. Now she must put Egypt first. Ever daring, she will lead a vast army and build great temples, but always she will be torn between the demands of leadership and the desires of her heart. And even as she makes her boldest move of all, her enemies will plot her downfall....

Once again, Stephanie Thornton brings to life a remarkable woman from the distant past whose willingness to defy tradition changed the course of history.

Praise For Daughter of the Gods: A Novel of Ancient Egypt…

Praise for Daughter of the Gods

“A wonderfully intimate and dramatic evocation of ancient Egypt, where one headstrong young woman dares to become pharaoh. Stephanie Thornton vividly portrays the heat and the danger, the passion and the heartbreak …A touching love story combines with a thrilling tale of death, courage and political intrigue to produce a superbly researched and powerfully written novel. This is the kind of book that grabs you by the throat and doesn't let go. A remarkable story, remarkably told.”—Kate Furnivall, author of Shadows on the Nile and The Russian Concubine

“An epic saga that brings ancient Egypt to life with vivid imagery and lovely prose. Stephanie Thornton is a rising star!”—Stephanie Dray, author of Lily of the Nile

“Hatshepsut crackles with fascinating complexity.”—Vicky Alvear Shecter, author of Cleopatra’s Moon and Curses and Smoke: A Novel of Pompeii

“Stephanie Thornton's heroines are bold, brave, and powerful—they make me want to stand up and cheer.” —Kate Quinn, author of Lady of the Eternal City

Stephanie Thornton is a writer and history teacher who has been obsessed with infamous women from ancient history since she was twelve. Her previous novel is The Secret History. She lives with her husband and daughter in Alaska.

What did you most enjoy about Daughter of the Gods? What do you think you will remember about it six months from now?

Hatshepsut begins as a tomboy, lively and unrestrained. Discuss how her sister’s death changes her. Do you think that a tragedy suffered during one’s formative years tends to have an outsized affect on us?

What most surprised you about the author’s depiction of ancient Egypt?

Discuss the various mothers in the book—Ahmose, Mutnofret, Hatshepsut, and Aset—and their child-raising methods and choices regarding their children’s future. Consider in particular Hatshepsut’s response to Neferure’s desire not to marry Tutmose, and Aset’s response to Tutmose’s choice of Satiah. If you were these women, how would you have acted in their situations?

Did you find the relationship between Hatshepsut and Senenmut satisfying? Discuss the possible consequences if Hatshepsut had ever become pregnant with Senenmut’s child.

Talk about the many animals in the novel, both the living animals and the animals used as symbols of different gods/goddesses and powers. What animals have played a part in your own life?

Why does Hatshepsut declare herself pharaoh? Do you applaud her or condemn her for it, especially in light of what happens to both the kingdom and to her loved ones afterward?

Once Hatshepsut usurps full power, she banishes Aset to a distant province. Was that a wise move? How might she have handled the situation differently? Did you feel sympathy for Aset?

Do you agree with this statement: Often women in power have few or no children. Discuss why this might be, pulling examples from history and current times.

The ancient Egyptians were extremely religious and also believed in the use of magic on a daily basis. How much of Hatshepsut’s religious expression seems to be based on pure superstition and how much on actual religious belief?

Egypt enjoyed thousands of years of relative stability and changelessness. Would you like to have lived then? Compared to our time, which is so full of change, what might be some pros and cons of living during a time when life continued very much the same, generation after generation?

How does this novel compare to other novels or movies about ancient Egypt that you may have read or seen? Does it explode any misconceptions you might have had?

Can you think of some ideas and traditions that started with the Egyptians that we embrace even today, so many thousands of years later?