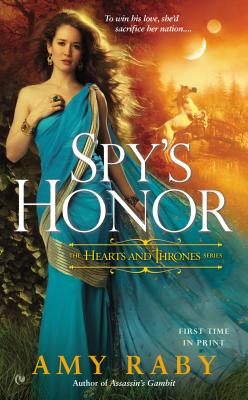 The Hearts and Thrones Series

Rhianne, mind mage and Imperial Princess of Kjall, cannot openly challenge the emperor. Instead she acts in secret to aid the victims of his worst excesses. But now the emperor plans to wed her to the cruel Augustan, the man leading Kjall’s attack against the nation of Mosar. Soon she will be torn from her supporters and shipped overseas, where she can help no one.

Mosari crown prince Janto is desperate to save his country from invasion. When one of his most trusted spies disappears while gathering intelligence at the Kjallan palace, Janto takes his place and continues searching for information that could save his people. But falling for the Imperial Princess was not part of his plan. Nor was having his true identity revealed...

Now Rhianne must make a choice—follow the path of tradition or the one of the heart, even if it means betraying her own race.

Amy Raby is the author of Assassin's Gambit. She lives in the Pacific Northwest.
Loading...
or
Not Currently Available for Direct Purchase