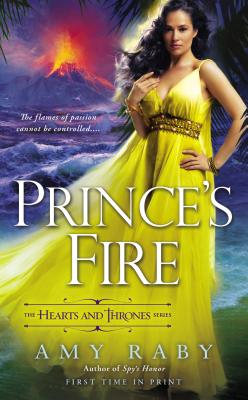 As the sister of the Kjallan emperor, Celeste cannot choose where to bestow her heart....

The imperial princess has been offered in marriage to the Prince of Inya as part of an alliance needed to ensure Kjall’s military prowess. And despite having been hurt in the past by men using her to gain power, Celeste finds herself falling for the passionate fire mage.

Prince Rayn has no intention of allying his country with the militaristic Kjallans. But his political enemies at home may be the greater threat. The princess’s beauty and intelligence catch him off guard, throwing an unexpected and dangerous hurdle in the way of his plans.

As a deadly political plot threatens Rayn’s life, the attraction between Celeste and Rayn ignites into a sizzling affair. But to save her people and herself, Celeste will have to discover if Rayn’s intentions are true or risk having her love burn her yet again....

Praise For Prince's Fire (The Hearts and Thrones Series #3)…

Praise for the Hearts and Thrones series

“In a strong debut launching an Ancient Rome–inspired romantic fantasy series, Raby offers a captivating tale of an assassin who falls for her target....The main characters have excellent chemistry, meshing right from the start. In addition to a richly imagined world and a delightfully entertaining tale of magic and intrigue, Raby also delivers an understated yet versatile magical system.”—Publishers Weekly

“An exquisite debut novel. The scope of the novel is…epic, as it roams through counties and territories, introducing us to dozens of strong and dynamic characters. The setting is beautiful, and the story line is one that will instantly attract readers searching for everything from a sizzling romance to a vast adventure filled with mystery, intrigue, and murder.”—Night Owl Reviews (top pick)

“Raby’s debut heralds the arrival of a terrific new fantasy romance voice....[Raby] has a gift for storytelling.”—RT Book Reviews

“There’s nothing quite as sexy as a woman who can be both assassin and lover....The hot tension between [Vitala] and Lucien will keep readers eagerly turning pages.”—Coffee Time Romance & More

“A great setting and protagonists worth rooting for.”—All About Romance

Amy Raby is literally a product of the U.S. space program, since her parents met working for NASA on the Apollo missions. After earning her Bachelor’s in Computer Science from the University of Washington, Amy settled in the Pacific Northwest with her family, where she’s always looking for life’s next adventure, whether it’s capsizing tiny sailboats in Lake Washington or riding dressage horses. Prince's Fire is the third in the Hearts and Thrones series, following Assassin's Gambit and Spy's Honor.
Loading...
or
Not Currently Available for Direct Purchase