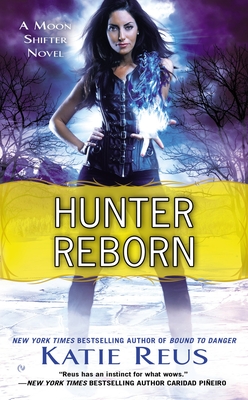 Losing her was the hardest thing he’d ever endured....

Warrior shifter Aiden’s investigation of the trafficking of vampire blood leads to a startling discovery: the beautiful vampire bondmate he thought was dead. Decades ago, they’d defied their powerful families to be together, but then Larissa disappeared without a trace. When their mating link broke, it nearly destroyed Aiden. Now she’s back with no memory of where she’s been. Even more shattering—Larissa claims she has no idea who Aiden is.

It’s a race against time to bring down an operation more evil than his pack ever suspected, and Aiden finds himself working side by side with a mate who no longer trusts him—and she wants out. But he lost her once, and he won’t let her go again. Unfortunately, Larissa’s blood is the key to a powerful monster’s dangerous plan—and he’ll stop at nothing to destroy her, sparking off a war between the supernaturals and humans that no one will win.

“Fast-paced romantic suspense that will keep you on the edge of your seat!”—Cynthia Eden, New York Times bestselling author

"If you are looking for a really good, new military romance series, pick up Targeted! The new Deadly Ops series stands to be a passionate and action-riddled read." --That's What I'm Talking About blog

Praise for the Moon Shifter Novels

Katie Reus is the New York Times and USA Today bestselling author of the Deadly Ops series, which began with Targeted, as well as the Moon Shifter series. She has a degree in psychology and lives near Biloxi, Mississippi, with her husband, who was a Marine scout/sniper and currently works as a police officer and SWAT team sniper.
Loading...
or
Not Currently Available for Direct Purchase