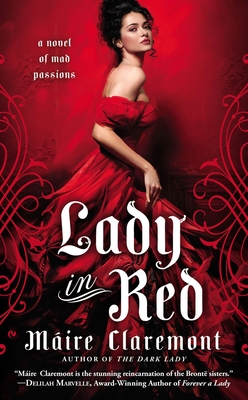 A Novel of Mad Passions

The Victorian era was full of majestic beauty and scandalous secrets—a time when corsets were the least of a woman’s restrictions, and men could kill or be killed in the name of honor.…

Lady Mary Darrel should be the envy of London. Instead, all society believes her dead. For Mary holds a secret so dangerous, her father chose to keep her locked away…and have a grave made for her near her mother’s. Driven to the edge of desperation, Mary manages to escape the asylum, only to find that her fate yet again rests in the hands of a man…

Edward Barrons, Duke of Fairleigh, longs for some way to escape the torment of his father’s crimes. In Mary’s warrior spirit and haunted gaze—which so mirrors his own—he finally sees his path to redemption. He will stop at nothing to keep her safe, even as she seeks revenge. But will the passion they discover in each other be enough to save them from their demons?

Praise For Lady in Red: A Novel of Mad Passions…

Raves for Lady in Red

“The second of Claremont’s Mad Passions series is wonderfully dark and intense. By drawing on characters from the previous volume and keeping the tension high, Claremont thrills her fans and will no doubt garner new readers seeking emotional intensity and angst not often found in romance. Think the Brontës, du Maurier and Holt. For those who relish the dark side, Claremont is their new queen.”—Romantic Times

Raves for The Dark Lady

“A tale of love, determination, scandal and plenty of angst.”—Publishers Weekly

“Dark, dramatic and intense.”—Anna Campbell, author of Seven Nights in a Rogue’s Bed

"With the first in the Mad Passions trilogy, Claremont establishes herself as a force in the genre — to be kept on readers’ shelves alongside Anne Stuart, Anna Campbell and Jennifer Ashley.” —Romantic Times

2011 Golden Heart winner Máire Claremont first fell in love with Mr. Rochester, not Mr. Darcy. Drawn to his dark snark, she longed to find a tortured hero of her own…until she realized the ramifications of Mr. Rochester locking his first wife up in his attic. Discovering the errors of her ways, Máire now looks for a real-life Darcy and creates deliciously dark heroes on the page. Oh, and she wants everyone to know her name is pronounced Moira. Her parents just had to give her an Irish Gaelic name.
Loading...
or
Not Currently Available for Direct Purchase