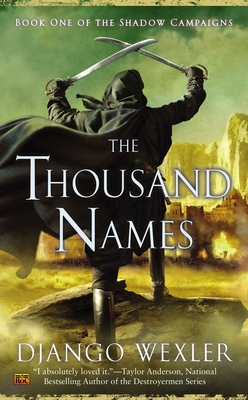 The Thousand Names (The Shadow Campaigns #1)

Set in an alternate nineteenth century, muskets and magic are weapons to be feared in the first “spectacular epic” (Fantasy Book Critic) in Django Wexler’s Shadow Campaigns series.

Captain Marcus d’Ivoire, commander of one of the Vordanai empire’s colonial garrisons, was serving out his days in a sleepy, remote outpost—until a rebellion left him in charge of a demoralized force clinging to a small fortress at the edge of the desert.

To flee from her past, Winter Ihernglass masqueraded as a man and enlisted as a ranker in the Vordanai Colonials, hoping only to avoid notice. But when chance sees her promoted to command, she must lead her men into battle against impossible odds.

Their fate depends on Colonel Janus bet Vhalnich. Under his command, Marcus and Winter feel the tide turning and their allegiance being tested. For Janus’s ambitions extend beyond the battlefield and into the realm of the supernatural—a realm with the power to reshape the known world and change the lives of everyone in its path.

Praise For The Thousand Names (The Shadow Campaigns #1)…

“A fascinating world of dust and bayonets and muskets...and magic.”—S. M. Stirling, New York Times bestselling author of the Novels of the Change

“I absolutely loved it. Wexler balances the actions of his very human characters with just the right amount of imaginative ‘magic’ to keep me wanting more.”—Taylor Anderson, national bestselling author of the Destroyermen series

“The incredible world building, character development and yes, even the complexity of it all, will hook epic fantasy fans and leave them anxiously waiting for the next book in the series. ”—Bookworm Blues

“Django does an excellent job with his characters...they are great fun to ride along with...”—Speculative Book Review

“A spectacular epic fantasy debut that heralds Django Wexler as a talented author and The Shadow Campaigns series as a future flintlock fantasy classic.”—Fantasy Book Critic

“Such detail on the military life! From camp conditions to battle tactics, to the lines of grand strategy, the authenticity of the military fantasy is here in full flower.”—SF Signal

“Succeeding volumes may end up doing for the Napoleonic Wars what George R. R. Martin did for the Wars of the Roses. Highly recommended.”—Anthony Ryan, New York Times bestselling author of the Raven’s Shadow Novels

“The Thousand Names is marvelously written, ingeniously conceived, and great fun. Without a doubt the best book of [the] year.”—Simon R. Green, New York Times bestselling author of the Secret Histories Novels

Django Wexler is the author of the Shadow Campaigns novels, including The Infernal Battalion, The Guns of Empire, The Price of Valor, The Shadow Throne, and The Thousand Names. He graduated from Carnegie Mellon University in Pittsburgh with degrees in creative writing and computer science, and worked for the university in artificial intelligence research. When not planning Shadow Campaigns, he wrangles computers, paints tiny soldiers, and plays games of all sorts. He is also the author of the middle-grade fantasy novels The Forbidden Library, The Mad Apprentice, and The Palace of Glass.
Loading...
or support indie stores by buying on