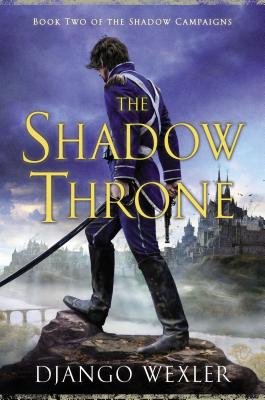 “An immensely entertaining novel” (Tor.com) from the author of The Thousand Names...

The King of the Vordan is on his deathbed. Soon his daughter, Raesinia will be the first Queen Regnant in centuries—and a target for those who seek to control her. The most dangerous is Duke Orlanko, Minister of Information, and master of the secret police. He is the most feared man in the kingdom, and he knows an arcane secret that puts Raesinia completely at his mercy.

But Raesinia has found unlikely allies in the returning war hero Janus bet Vhalnich, and his loyal deputies, Captain Marcus d’Ivoire and Lieutenant Winter Ihernglass. As Marcus and Winter struggle to find their places in the home they never thought they would see again, they help Janus and Raesinia set in motion events that could shatter Orlanko’s powers, but perhaps at the price of throwing the nation into chaos. But with the people suffering under the Duke’s tyranny, they intend to protect the kingdom with every power they can command, earthly or otherwise.

Django Wexler is the author of the Shadow Campaigns novels, including The Infernal Battalion, The Guns of Empire, The Price of Valor, The Shadow Throne, and The Thousand Names. He graduated from Carnegie Mellon University in Pittsburgh with degrees in creative writing and computer science, and worked for the university in artificial intelligence research. When not planning Shadow Campaigns, he wrangles computers, paints tiny soldiers, and plays games of all sorts. He is also the author of the middle-grade fantasy novels The Forbidden Library, The Mad Apprentice, and The Palace of Glass.

Praise For The Shadow Throne (The Shadow Campaigns #2)…

"If The Thousand Names had echoes of "Beau Geste" and "The White Feather," then The Shadow Throne suggests a mutant fantasy descendant of "The Scarlet Pimpernel."  Oh, and did I mention a truly creepy and intriguing magic system? [...] The pieces dance, the pace is deft, and I can't wait to see what happens next!"—S.M. Stirling, New York Times bestselling author

“Can I finally say The Shadow Campaigns is one of my favorite fantasy series out right now? Certainly my favorite military fantasy. I knew from the very start that The Thousand Names would be a tough act to follow and that book two would have big shoes to fill, but The Shadow Throne was no slouch; it delivered exactly what I wanted to see in the sequel – raised stakes, impactful decisions that furthered the plot, and of course, more of Wexler’s outstanding characters."—Bibliosanctum.com

“The Shadow Throne is an extremely successful second-in-a-series book, and nearly perfect one in that regard. Wexler takes the characters we know from the previous volume and puts them in challenging situations which allows them to grow along the track charted in the first novel, with some surprises as well. It is a novel that, a week after finishing it, still has me thinking strongly about it, realizing upon reflection how very good it was/is, and anticipating the third book in the series.”—SFFWorld.com

“This audacious and subversive sequel to 2013’s The Thousand Names shifts from the previous book’s military campaign into a political intrigue that examines issues ranging from gender identity to the development of democracy…Wexler throws a lot into the story, but the mash-up of 17th-century technology and demon-summoning assassins comes together nicely.” – Publishers Weekly

“This is an immensely entertaining novel.”—Tor.com
or
Not Currently Available for Direct Purchase
Copyright © 2020 American Booksellers Association