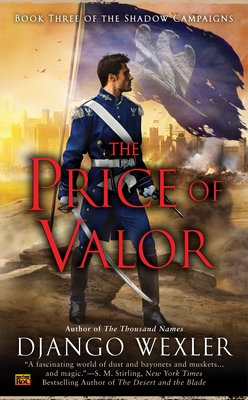 The Price of Valor (The Shadow Campaigns #3)

In the third Shadow Campaigns novel, Django Wexler continues his “epic fantasy of military might and magical conflict,” (Library Journal) following The Shadow Throne and The Thousand Names.

After the king’s death, war has come to Vordan. The Deputies-General, led by a traitor-seeking zealot, has taken control. Queen Raesinia Orboan is nearly powerless as the government tightens its grip and assassins threaten her life. Unwilling to see the country come under another tyranny, she sets out to turn the tide of history.

As the Sworn Church brings the powers of the continent to war against Vordan, General Janus bet Vhalnich offers a path to victory. Winter Ihernglass, newly promoted to command a regiment, has reunited with her lover and her friends only to face the prospect of leading them into bloody battle.

And the enemy is not just armed with muskets and cannon. Dark priests of an ancient order, wielding forbidden magic, have infiltrated Vordan to stop Janus by whatever means necessary...

Praise For The Price of Valor (The Shadow Campaigns #3)…

Praise for The Shadow Campaigns

“Wexler has produced something unusual in the fantasy line, with a setting reminiscent of the early Victorian period, out on the bleeding edge of Empire, a world of dust and bayonets and muskets...and magic...I read it at a gulp and look forward to more.”—S.M. Stirling, New York Times bestselling author of the Novels of the Change

Django Wexler is the author of the Shadow Campaigns novels, including The Infernal Battalion, The Guns of Empire, The Price of Valor, The Shadow Throne, and The Thousand Names. He graduated from Carnegie Mellon University in Pittsburgh with degrees in creative writing and computer science, and worked for the university in artificial intelligence research. When not planning Shadow Campaigns, he wrangles computers, paints tiny soldiers, and plays games of all sorts. He is also the author of the middle-grade fantasy novels The Forbidden Library, The Mad Apprentice, and The Palace of Glass.
Loading...
or support indie stores by buying on
(This book is on backorder)