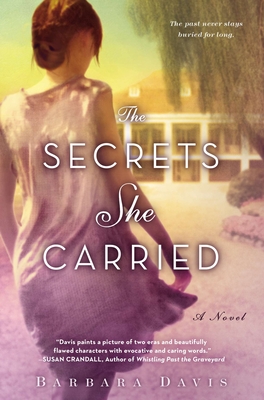 The Secrets She Carried

When a young woman returns to North Carolina after a thirty-year absence, she finds that the once grand tobacco plantation she called home holds more secrets than she ever imagined.

Though Peak Plantation has been in her family for generations, Leslie Nichols can’t wait to rid herself of the farm left to her by her estranged grandmother Maggie—and with it the disturbing memories of her mother’s death, her father’s disgrace, and her unhappy childhood. But Leslie isn’t the only one with a claim to Peak.

Jay Davenport, Peak’s reclusive caretaker, has his own reasons for holding onto the land bequeathed to him by Leslie’s grandmother. Before she died, Maggie hinted at a terrible secret surrounding Adele Laveau, a lady’s maid who came to Peak during the 1930s and died under mysterious circumstances. Jay is haunted by Maggie’s story, yet the truth eludes him—until Leslie uncovers a cryptically marked grave on the property.

As they delve into the mystery of Adele’s death, Leslie and Jay discover shocking secrets that extend deep into the roots of Leslie’s family tree—secrets that have the power to alter her life forever.

Praise For The Secrets She Carried…

Praise for The Secrets She Carried

“Davis paints a picture of two eras and beautifully flawed characters with evocative and caring words.”—Susan Crandall, author of Whistling Past the Graveyard

“Lovely and assured writing. Adele Laveau's haunting voice and Leslie Nicholl's journey toward understanding lingered long after I read the final page of this engrossing tale."—Julie Kibler, author of Calling Me Home

“A beautifully crafted page-turner with many twists but a simple theme: no matter how far you run, you can’t escape your past.  Part contemporary women’s fiction, part historical novel, the plot moves seamlessly back and forth in time to unlock family secrets that bind four generations of women….A stunning read from the first page to the last sentence.”—Barbara Claypole White, author of The Unfinished Garden

After spending more than a decade in the jewelry business, Barbara Davis decided to leave the corporate world to pursue her lifelong passion for writing. The Secrets She Carried is her first novel. She currently lives near Raleigh, North Carolina with the love of her life, Tom, and their beloved ginger cat, Simon.

Running away rather than confronting uncomfortable situations is one of the themes of the book. What situations, past or present, is Leslie fleeing? Are the potential consequences she fears emotional, physical, or both?

What other characters in the book are seeking to run away from something, and how does that avoidance express itself? What pitfalls do they encounter as a result?

In the early part of the book, the relationship between Leslie and Jay is tense and wary. What events eventually lead them to realize they may have misjudged each other?

How does Adele’s voice (first person, present tense) contribute to the overall flavor of the book? How did you feel about her story being told from beyond the grave?

Do you have a favorite passage or scene from the book, and if so, what about it speaks to you?

The book includes two women who evolve deeply as a result of story events. Discuss how Leslie and Adele change, learn, and grow over the course of the book. What specific events lead to this growth?

Discuss Henry’s strengths and weaknesses. Though Adele never stops loving him, how does her perception of him change as the book progresses? How did you feel about his decision to send Jemmy away?

How does Leslie’s sense of family evolve over the course of the novel, and what events or discoveries specifically influence that evolution?

The heart wants what it wants is repeated several times throughout the book. Do you see Adele relinquishing Maggie to Susanne as an act of strength or weakness? Does love justify any action?

At the end of the book, we discover that Adele is part African American and has been passing as white. How do you think southern society in the 1930s would have responded to someone like Adele, especially in light of her relationship with Henry?

The book closes with Adele speaking of the choices she has made over her life, as well as the wages of her sins. How does her assertion that we can only choose in the moment and then live with what we have chosen stand up to your own beliefs about life choices and regret?