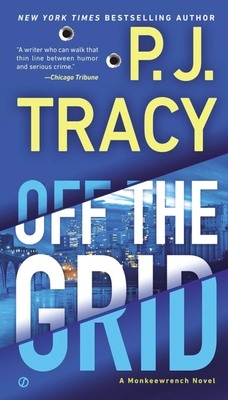 Off the Florida coast, Grace MacBride, partner in software company Monkeewrench, thwarts an assassination attempt on a retired FBI agent. A few hours afterward in Minneapolis, a young girl’s throat is slashed. Later that day, two men are killed execution style. Minneapolis Homicide detectives Leo Magozzi and Gino Rolseth struggle to link the three crimes, but the wave of murders across the country has only just begun. Piece by piece, evidence accumulates, pointing to a suspect—and a motive—that shocks them to the core. It puts the entire Midwest on high alert...and Monkeewrench in the line of fire.

Praise For Off the Grid: A Monkeewrench Novel…

“A writer who can walk that thin line between humor and serious crime.”—Chicago Tribune

Praise for the Monkeewrench Novels

“A killer read in every way.”—People

P. J. Tracy is the pseudonym of the mother-daughter writing team of Patricia Lambrecht and Traci Lambrecht. Winners of the Anthony, Barry, Gumshoe, and Minnesota Book awards, they both live outside Minneapolis.
Loading...
or support indie stores by buying on