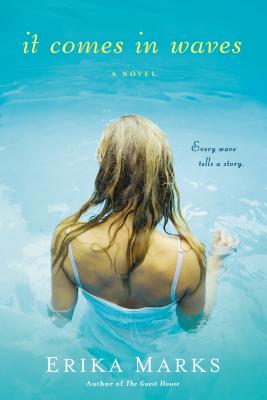 It Comes in Waves

"For competitive surfer Claire "Pepper" Patton, the waves of South Carolina's Folly Beach once held the promise of a loving future and a bright career until her fiance, Foster, broke the news that he and Claire's best friend, Jill, were in love."
Eighteen years later, now forty-two and a struggling single parent to a rebellious teenage daughter, Claire has put miles between that betrayal and that coast. But when ESPN invites her back to Folly Beach for a documentary on women in surfing, Claire decides it might be the chance she needs to regain control of her life and reacquaint herself with the unsinkable young woman she once was.
But not everything in Folly Beach is as Claire remembers it, most especially her ex-best friend, Jill, who is now widowed and raising her and Foster's teenage son. An unexpected reunion with Claire will uncover a guilt that Jill has worked hard to bury and bring to the surface years of unspoken blame.
When Claire crosses paths with a sexy pro-surfer who is as determined to get Claire back on a board as he is to get her in his bed, a chance for healing might not be far behind or is it too late for two estranged friends to find forgiveness in the place that was once their coastal paradise, where life was spent barefoot and love was as dizzying as the perfect wave...
CONVERSATION GUIDE INCLUDED.

Praise For It Comes in Waves…

Praise for the Novels of Erika Marks

“This is women’s fiction to be savored.”—Library Journal (Starred Review)

A native New Englander who was raised in Maine, Erika Markshas worked as an illustrator, an art director, a cake decorator, and a carpenter. She is the author of"The Guest House," "The Mermaid Collector"and "Little Gale Gumbo.""

At the outset of her trip, Claire is going back to Folly Beach with the goal of repairing her relationship with her daughter, but over the course of the visit, her focus shifts, especially when she learns that Shep and Jill have convinced Ivy to put the surf shop up for sale. Do you think it was Claire’s place to step in and encourage Ivy to keep the shop, or was she overstepping her bounds, as Shep and Jill claimed?

Claire has a very complicated relationship with her mother, Maura. Do you think that Claire’s desire to belong to Foster and be a part of his life was just about being in love with him, or did she also crave the sense of belonging and acceptance she felt with his mother, Ivy? Do you feel by the story’s end Claire has come to terms with that question? Do you feel hopeful for her relationship with her mother going forward?

Not surprisingly, Claire and Jill’s friendship suffered from the fallout of Jill and Foster’s love. By the novel’s end, do you feel Jill and Claire have a chance for reconciliation? Do you think it’s ever possible to move beyond this kind of disruption/betrayal in a friendship?

While back in Folly, Claire voices to Ivy her worry that Foster loved only her, Claire, because Ivy approved of her. Do you agree with that assessment?

While Foster loved Claire, he found himself falling for Jill, even though, by all appearances, Claire was a more likely match for him. What about Jill appeals so strongly to Foster? Conversely, why does Jill fall in love with Foster?

Claire feels a new betrayal when she learns that Shep has taken Jill back. What do you think about his choice to resume his relationship with Jill after everything that happened between them? Do you think you could you take back a lover who had left you under similar circumstances and after so many years apart?

Claire’s mother, Maura, asserts that Claire doesn’t take responsibility for her own choices, but rather blames everyone else and sees herself as a victim—do you agree? Discuss examples in Claire’s life where that may have been the case, such as her divorce, and her eventual moving away from surfing.

Gus arrives in Claire’s life at a time when she is most vulnerable and needing a sense of peace and self-worth. How does he help her find that? Were you happy with the way things stood for Claire and Gus at the novel’s end?

Ivy has long held to a belief that it was Jill’s fault that Foster moved away from the surfing life and the shop Ivy always imagined him inheriting. By the story’s end, do you feel that Ivy has come to see a different view? Do you think this will change her relationship with Jill in the future? If yes, how?

Even though she is desperately curious as to the contents, Jill can’t bring herself to read Foster’s lost letter to Claire, but the reader finally learns the truth of its words. Were you glad about the letter’s sentiments or did you hope for a different outcome? Would you have had Jill’s resolve not to read it, or would your curiosity have gotten the best of you over time? The author doesn’t make it clear whether Claire eventually reads the letter, or if the letter is only there for the reader’s viewing—do you like to imagine Claire did read it, or would you rather think she, like Jill, had come to a place of peace never knowing?